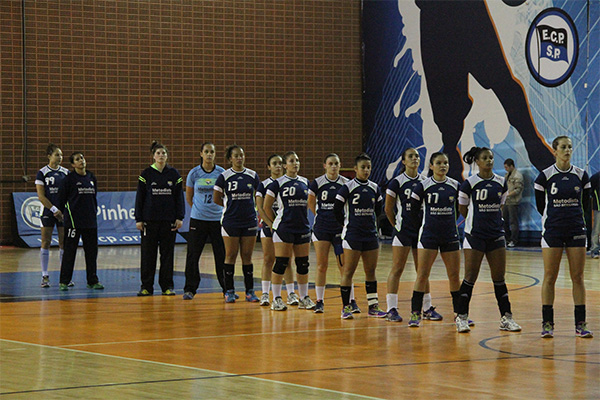 In 2013, Metodista/São Bernardo did not qualify for São Paulo Women’s State Championship Final after lifting the trophy seven times in a row. For this season, coach Eduardo Carlone and staff worked intensively to put together a strong and competitive team.

They did it by keeping current players and bringing some new ones with potential. Since the state tournament started, the squad played seven matches and won all of them. The last one took place in São Paulo and it was the Derby against Esporte Clube Pinheiros.

And it was not easy to win, as it should be. World champion Alex Aprile, assistant coach for Morten Soubak in Serbia, also worked intensively on this team since two years ago. The result is a fast and young group, with their strength in attack.

Pinheiros took the lead in the first half, opening a three-goal advantage at half time, 17-14. Players were much focused on defense, and attacking with speed and creativity.

In the second half Metodista/São Bernardo played returned to court differently. Much more focused, making less mistakes and turning the counter attacks into goals, the team quickly equalized the score and took the lead at 10 minutes, 21-20.

National Team player Celia Costa was constantly motivating her teammates to do their best and she scored all seven-meter shots. Danielle Lira, elected Player of the Match, was also a key piece in the second half, organizing plays and creating the best opportunities to score.

Metodista/São Bernardo won by 31-28, remaining undefeated. “Our team is very experienced in many aspects. Pinheiros’ is young and fast, and dictated the rhythm in the first half. It was up to us to take control of it and win. I believe our continuity and physical strength were key points”, said right back Danielle Lira.

According to playmaker Gabriela Pessoa, even though Pinheiros did not win the squad had a positive experience and it will help in upcoming matches. “We played a good first half. In the second one, we had many difficulties in attack and taking the ball to the wings. Our defense did a good job but we could not score. We are going to work on these aspects and train hard for the rest of the championship”.