EHF EURO 2014 in Hungary and Croatia – groups are ready 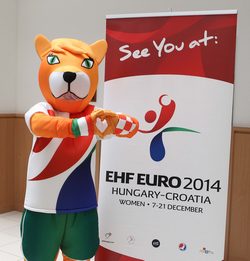 EHF EURO 2014 in Hungary and Croatia – groups are ready

Foxette, the mascot of the tournament – photo: EHF

A field made up of experienced squads as well as up and coming national teams will take to the court in December in Hungary and Croatia. International ticket sales for the event start on 8 July 2014.

At the final tournament draw in Zagreb the teams were drawn in the following groups  with help of  Katarina Bulatovic (MNE), Andrea Penezic (CRO), Jelena Eric (SRB) and Viktória Soós (HUN).

Group D: Montenegro, France, Serbia, Slovakia
The preliminary round will be played in the Hungarian cities of Györ (Group A) and Debrecen (Group B) and the Croatian cities of Varazdin (Group C) and Osijek (Group D).

The main round will take place in Debrecen and the Croatian capital, Zagreb.

For the finals the event will move to Budapest.The two hosts, Hungary and Croatia, had the right before the draw to determine one team per group. This meant that Hungary had already been placed in Group A, Denmark in Group B, Croatia in Group C, and Slovakia in Group D.

The final tournament in Hungary and Croatia takes place from 7 to 21 December 2014.

“In little less than six months, the global handball community will get to witness the very best of women’s European handball in the wonderful countries of Hungary and Croatia. Both have shown in the past that they are more than capable of staging superb handball events,” said EHF President Jean Brihault at the final tournament draw in Zagreb.