“Our goal is the Olympics” 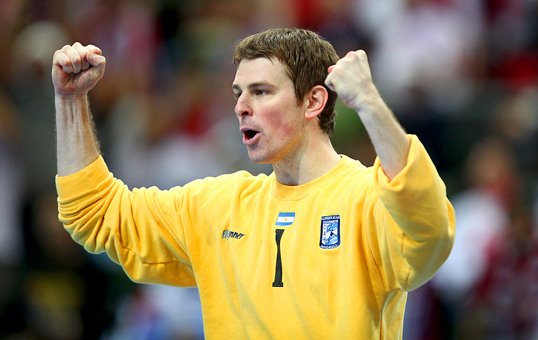 “Our goal is the Olympics”

Argentinean goalkeeper Matias Schulz spoke to Time Out Mag after the Pan-American title, won in Uruguay. The Argentineans beat Brazil in the final game, 30-19, thus becoming continental champions and qualifying for the World Championship in Qatar next January.

What were Argentina’s strenghts in the tournament, especially in the final?

For us it is always very important to have a great deal of defensive intensity and in this championship our defense played really well. Our adversaries never scored more than 20 goals and this gave us a lot of confidence. We also seized our counter attacks and the attack was very productive at all times, with Diego Simonet playing an extraordinary championship.

Was the final against Brazil the most dificult game in the tournament?

Final games against Brazil are always very tough and difficult. First half was very levelheaded, but in the beginning of the second half we took the lead and kept scoring thanks to our great defense. Despite the goal difference in the end, I believe that we were very focused in the entire match.

Did you expect to win with that goal difference?

We always have the win in mind, but that difference surprised us a bit. We really left almost everything on the court and Brazil fell a bit mentally in the second half.

Did you begin your preparation for the World Championship?

Argentina is already thinking about the World Championship, but above all, we are focused on the Olympic qualification in Toronto. We have one year to prepare for and arrive in Canada in our best shape. The World Championship is very important indeed and we want to play well in Qatar but our goal is the Olympics.

Will you be going to Europe to practice or anything similar?

In November we are going to reunite the team in Recife (Brazil) to play a friendly tournament with Brazil, Egypt and Algeria. It should be very useful to keep working and gain a higher rhythm of competition. I believe we will also play some friendly matches in Europe in January, right before the World Championship.