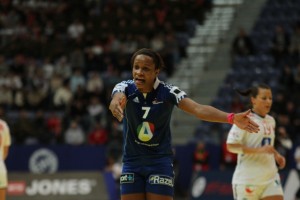 Last week came the new from Vardar about French Allison Pineau, who left the club with immediate effect, finishing her contract with common understanding.

Rumors told that Pineau has decided to make a knee surgery at the beginning of the season, due to old injuries, but she didn’t agreed about that with her club, only with the French handball federation.

Vardar wishes her all the best after finishing the agreement.

The 25 years old playmaker will continue her career at Slovenian club, Krim Ljubljana, until to the end of this season.

Krim struggled with serious economical problems at the end of last season, class players left the club and they building a new team based only on young players, the clubs budget is halved compared to last season. They are competing in CL, Group A.