Audi Arena Győr-opening was on Saturday

Audi Arena Győr-opening was on Saturday

On 15th November 2014 a new hall was opened in Győr. Audi Arena Győr was constructed this year, in purpose to be ready for the EURO 2014 in December. The venue will be the new home of the Champions League title-holders, Győri Audi ETO KC and will host Group A of the EURO 2014 with Hungary, Spain, Russia and Poland. 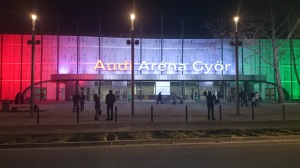 The hall seats 5,500 spectators and it already fixed that it will not only be the new home for Women’s EHF Champions League winners Györi Audi ETO KC but will host numerous international sport and cultural events.

Following the preliminary round matches of Group A of the Women’s EHF EURO 2014, parts of the European Basketball Championship in 2015 and the handball competition of the European Youth Olympic Festival in 2017 will also be played in Györ.

The Audi Arena Györ is located only four kilometres away from the city centre with public transport stopping directly in front of it. 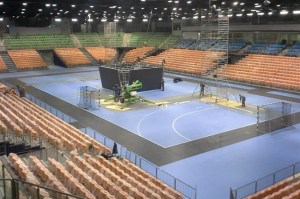 It is furthermore connected to the renovated Magvassy Mihály Sports Hall that has a capacity of 2,400 spectators.

The new arena’s press centre seats 84 journalists, while the VIP area is big enough for 192 guests.

There are 1,100 parking spaces around the arena, providing plenty of space for visitors arriving by car.

Adrienn Orban out with injury at least six weeks
Katrine Lunde – will she continue in Győr?