Group A: Spain into the Main Round by winning Russia

Group A: Spain into the Main Round by winning Russia 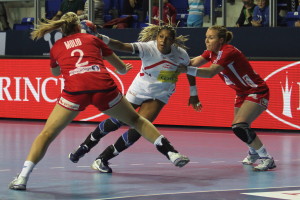 The first half of the game started with goals by each sides, the teams were following each other closely , with slight Spanish lead in some periods (3-5,4-6) with Navarro”s strong support between the sticks. Sidorova had no saves in the Russian goal until the minute 18.of the match, but after that cused serious problems to the Spanish offense with her parades, having totally  nine saves, and Russia took the lead, 13-10, 14-13 before break. Kuznetcova and Davydenko was responsible for Russian goals, meanwhile Spanish side had a real leader in Marta Mangue, unstoppable and Carmen Martin from seven meter line. 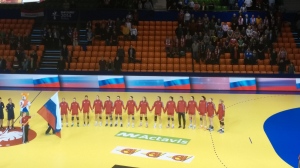 The second part of the match started with Russian goals (16-13) but Spain managed to cloe the gap and to overturn the result, 18-21, every player making a contribution to this. This watch the match of the seven meter penalties and two minute suspensions, on both sides. Cabral goes out with red card.

” We made a really good game against Russia, we played smart and we followed the tactics. We knew that Russians are really big players, and is very hard to shoot from distance, that is why we tried to go through their defense and to defend in a way that they won’t be able to score easy goals.

Now we are qualified to the Main Round, I am really glad for that, but we want to arrive in Debrecen with all the points, so my wish is to defeat also Hungary on the last game”