Hungary defeats Romania in Main Round

Hungary defeats Romania in Main Round 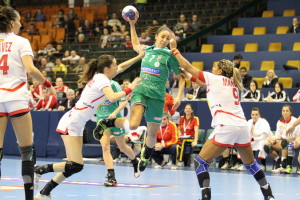 The match between hosts from Hungary and their neighbours from Romania is always intense, with many supporters on the stands, with high spirit, lot of noise and exciting game.

Today started with a long period, six minutes without any scoring, 0 – 0. Hungarian goalkeeper had a sensational day, Éva Kiss saving all of the shoots sent from Romanian attack to her goal for ten minutes.

Hungary had also problems to put the ball in the goal behind Paula Ungureanu, so the score was only 2 – 0, then 3-1 (11.minute). Balanced, exciting game, both teams were fighting in defense, few goals onl, 4- 4 (18.minute).

Hungary managed to take the lead at 5-4, then increase it 6-4, 7-5, 8-5, 9-6. Szucsánszki, Triscsuk, Tomori and Mészáros netted for hosts side, meanwhile Romania had Neagu, Chintoan, Chiper, Babeanu, Bradeanu and Perianu to sign the goals.

Hungarian rookie, Gabi Tóth has made her debute on international scene, by playing about ten minutes in the first half. She replaced Klivinyi in the squad.

The match could be labeled as one with though defenses and many mistakes in attacks, very good goalkeeper performance on both sides and tensionate athmopshere on the stands.

The second half started with Hungarian scoring by Mayer form lineplayer position, 11-8, than Romanianns reduced the gap, Bradeanu scored twice, 11-10.Hungary increased the  lead again, 13- 11, but the opponent equalized at 13-13, than had the advantage by a penalty transformed by Cristina Neagu. 13-14 (41.min).

Oscilating score and oscilating play from the both sides, 14-14, 15- 14, than 15-17, 16- 18 for Romania. Hungarian team seemed to be clueless in their offensive play, Ungureanu made them to be scared when shooting.

Debutee Gabi Tóth seemed to be more thean 18 years old, she scored twice for a draw than got a penalty, and Hungary took the lead again, 20-19.

Dying minutes were quite exciting, but Hungary managed to keep this slight advantage and win.

Norway takes big step to the semifinals defeating Spain
András Németh: “I expect much more from my players in attack”