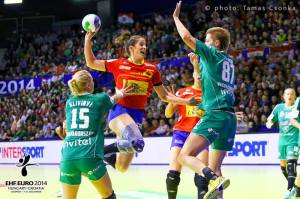 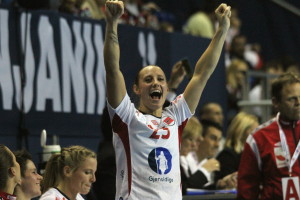 The match between the two groupwinners, Spain and Norway started with Spanish lead, then Norway equalized, Marta Mangue, Nerea Pena and Carmen Martin ruled  the game for Spanish side, Scandinavians were hold in game bu Camilla Herrem, Linn-Kristin Riegelhuth Koren and her sister Bettina Riegelhuth, who scored the equalizer in the dying seconds of the first half. Half time result: 16 – 16.

The second part of the game Noway took the lead with a good start,17 – 20, but Spain managed to level the game at 20 -20, when Norway has been shorthanded. Then Silje Solberg made several good saves and Oftedal scored for the lead again twice, 20 -22, then teh result became 21 -24.

26 – 26 -draw again after Pena was penatratig the Norwegian wall again, but leftback Bettina Riegelhuth made the match of her life, scoring also seven times from distance shooting, 26 -27.Navarro saved a seven meter penalty in the dying minutes of the game, then Nora Mörk increased the gap to two, 26 -28.

Best players of the match: Nerea Pena (ESP) and Heidi Löke (NOR)

Denmark victorious against Poland
Hungary defeats Romania in Main Round