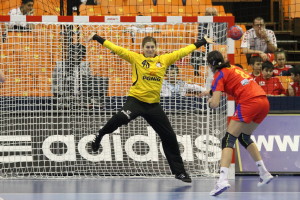 Main Round, Group I, third round

Romania has gained 5 points after MR, has chances to play for 5/6. places. Poland finished with zero points.

” I am very proud of my team, for showing such a strong spirit if fight, to win this match and keep alive chances to get to play for the 5/6.place. Our goal was to reach the first eight places, of course this depends also on the next matches of the group. I have to congratulate to my goalkeeper, Paula Ungureanu showing such a great saving performance, highclass I have to say, which helped us a lot. Today ypung Gabriela Perianu has steped in for Tacalie and her extra performance was important for the team.

During the preparation and group matches we lost several players due to injuries- Marin, Nechita, Tacalie, but the girls has fought fantastic and I am satisfied. This is a young team, with hopes for the future.”

“It’s good that we could stand up after everything and we won two games in a row and this is fantastic. I really hope from all my heart that we can go tomorrow in Budapest. The biggest disappointment may be the game against Hungary because today we could have kept a chance for the semi-finals, but this is handball, this is sport, we need to look forward and I hope we will have a little bit of luck today with the other teams and go tomorrow to Budapest to play for fifth place.”

“We take the positive things. We reached the main round; we are between the 12 best countries in Europe right now. This is a success for Polish women’s handball. This tournament was very tough; there have been absolutely no easy games.

“I am proud that after last years susscess we were able to be here and fight against the best teams in the world. We had several problesm under the preparation and during this championship we were not enough effective in our attack, that was the main problem to  finishing on the sixth place in this MR group.”

Headcoach of Hungary, András Németh has replaced a player, Bernadett Temes came into the team instead of leftwing, Ildikó Erdősi.

Player replacements in Debrecen before the last matches
Zagreb: Montenegro and Sweden to semifinals