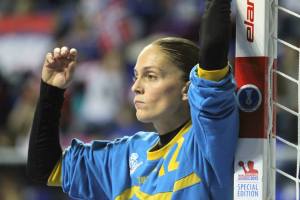 The first half could be described as the half of Spanish team, Montenegro had no chance to get the lead, Navarro was outstanding in the Spanish goal, Mangue, epna, Cabral and Pinedo netted for Spain, menawhile Montenegro was srtuggling,K.Bulatovic, Radicevic and Pavicevic scored the goals, to keep the title holder in race.

The second half brought a better start for Montenegro, with Rajcic in the goal, having several savings and Spain having problems in attack, without score for 12 minutes.

Montenegro has put a last fight onto the court, Jovanka Radicevoc scored three times, 17-18 for Spain.

Silvia Navarro’s performance was up to 50%, Spain managed the dying minutes better than Montenegro and won the first semifinal.

“If you do not play good defence, you struggle in the attack as well, because you do not bring any good energy from the defence. We commited too many mistaked in the attack. We were much better in the second half and we believed until the end, however we were not lucky enough. But such is a life and we can still stand in front of the mirror and say that we have done everything we could.“

On the performance of Silvia Navarro:

“She is always good. That was no surprise. But the problem was on our side. We managed to create good chances, but were not able to convert them.“

On whom she wants to meet in the final:

“I’m in shock, we won and now I just want to win the final as well. I hope to face Norway, I really want to play against Norway. We lost the final to them in Macedonia (at the EHF EURO 2008) and the match against them in this championship, to meet them on Sunday would be great.”

“We know Norway better then we know Sweden, we made it too easy for Norway in previous matches, our key to win against them is our defence. We are going to win the final and take the gold medal.” 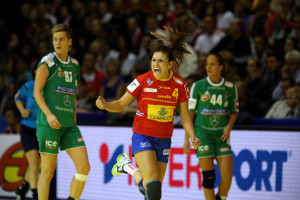 On going to the final:

“It feels amazing, we played really good today, we destroyed them in the first half, but in the second half we didn’t relax so we didn’t finish the job properly. In the end it doesn’t matter, because we won”

On the Spain’s goalkeeper Silvia Navarro:

“We miss a lot on our chances, but our defence is good and Navarro was amazing and she really saved us today.”