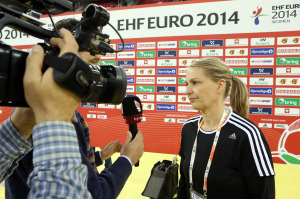 “We made a very good gme, but it could go both ways. We managed to hold our heads cold until the end, we had a good goalkeeper performance, a good woking defense and our player could mobilize some extra energies to hold the result..

About leading FCM and Sweden to the semifinals in 2014

” I am maybe lucky, but hard works always pays off. In addition I could work with two excellent teams and

About  the goals of Sweden before the competition

“We never dreamt to reach so high, our main goal was to qualify to the first round.

” It”s hard to say, because Linnea was mayble a bit late on that phase and she was though, but maybe it was a move for a two minutes suspension. Anyway without watching the video I cannot evaluate it correctly.

About play-off draw against Croatia

” It’s hard to think about this right now, I want only to enjoy this bronze medal, the Christmas and than I will have time to think about the playoffs against Croatia, which is offcourse a difficult opponent.

“We had several players who could help the team in today’s game, we have  a wide squad, and we used many players during the championship, so we were not so tired as Montenegro.

In addition today we had a superb goalkkeper performance, which we didin’t before, and that penalty save in the dying minutes meant the victory for us and the bronze medals.

“Croatia is a though oppoennet, but they lost Tatari at this WCh, so maybe that weakend them.

“I am proud of my team, and this fourth places brings us much closer to the Olympic Games in Rio. At the next tournament we will be better.”

” I am very sad, disappointed and tired right now, we fought until the end, but when yuo are tried phisically, your head doesn’t work properly either.

We have played all the tournament with eight fieldplayers and this was a huge handicap from our view, because more rested Swedish players could hold their hads colder in  a tensionate game,decided in the dying minutes.”