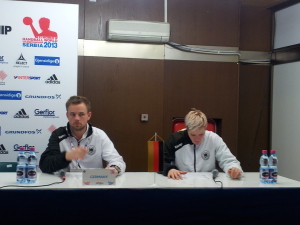 Germany has not achieved big successes at these tournaments, however the squad was quiet strong and varied.

In December 2014 Germany came on a 10th place, and got as playoff opponent to the next years Wch Russia.

The German Handball Federation is not satisfied with the result and has decided to fire Heine Jensen.