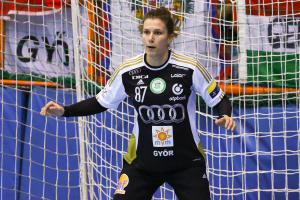 During the match of Hungarian Legaue between Győri Audi ETO KC and Siófok Galerius KC, on Saturday, the goalkeeper of Győr, Jelena Grubisic has suffered an injury meanwhile she tried to save a penalty.

The 27 year Croatian goalkeeper had to leave the court, and today’s medical examination’s showed that Grubisic suffered an ACL ruputure injury on her right (healthy) knee, which sets her at the sidelines for six months. Surgery and long recovery period will follow.

Jelena Grubisic about the injury:

“I am very sad that this happened , mostly beacuse I won’t be able to help the team. I will be with them anyway and cheering for them, and promise to be back. I would also like to thank all the people for support!

Of course nobody deserves to be injured, but this is sport and life, there is always something good in bad things too, so we need to keep looking forward and search for the positive things in life”

Timeoutmagazine wishes a fast and total recovery for Jelena Grubisic!

Győr has Katrine Lunde out with pregnancy, Grubisic has beeen transferred to replace her. Right now Herr Orsolya is the only healthy goalkeeper, since Kyra Csapó is also recovering from an ankle injury.