Danish rightback, Line Jörgensen ( 25) will play from the next season in Romania, she had signed a 2 years contract with CSM Bucuresti. The excelent rightack is playing in FCM and she is member of the Danich national team.

“It was hard to keep such a big secret. I want people to know that I will join  CSM Bucharest, where  a top team builts. I always had the ambition to see how far I can reach in handball and Bucharest is the next step in my career.

I am eager to move to Bucharest after five superb  years at FC Midtjylland, which were my best years as a handball player.

To change club and country was not an easy decision for me, but I’m sure Bucharest has much to offer and I am convinced that CSM Bucuresti is the right choice and a step forward in my international career  ” -Line Jörgensen said. 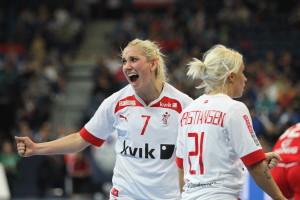 “In Bucharest a very interesting project is planned, that have all the chances to materialize. I can not wait to play for CSM Bucuresti  because here is building a super team, of which I am honored to be part of.

Of course, it is an important step in my career, but I am delighted to work with technical staff composed of Mette Klit and Jakob Vestergaard, two technicians that I respect and I’m sure will have more to say in the world handball. I  am also looking forward to meet Cristina Varzaru again, whom I played with in Viborg earlier.”  – Maria Fisker stated about her transfer.

Rumours are telling that CSM Bucuresti is also negotiating with Swedish playmaker Isabell Gulldén, the last MVP of the EURO’s.