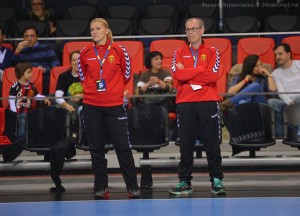 The team of Vardar has reached twice in a row the MVM Final 4 in Budapest, but both times managed only to get the bronze, being stopped by Buducnost in the semifinals. This year they will surely wants more.

Macedonian champions are consisted of a bunch of Balcanian and Russian superstars, national team members from Serbia, Montenegro, Slovenia, Croatia, being spiced with German and French national team members, led by a Macedonian (Indira Kastratovic) and a Danish (Jan Pytlick) headcoach, we have to recognize that is a dangerous combination for every opponent from or outside the Balcans.

Another matter making this powerfull team more dangerous is their constancy and stability regarding the composition of the team.

Only two newcomers are registered, Serbian Sanja Damnjanovic and Croatian Andrea Covic joined before this season, meanwhile Allison Pineau left to Baia Mare, Begona Fernandez and  Julija Nikokic has retired. some younger Macedonian players was moved to their junior team.

One of the newcomers, leftback Serbian Sanja Damnjanovic arrived after two years played in Danish League at Viborg, says:

“The primary objective is the FINAL 4. Two years in a row, Vardar was there, but always missed one step to take the trophy. It’s not easy to take it, because many clubs work many years to get it. So we expect a difficult journey, as several teams have the possibility to win the Champions League. But when you are in Budapest, anything is possible.”