Inside HBL: Martin Strobel is “The Unimposing One” 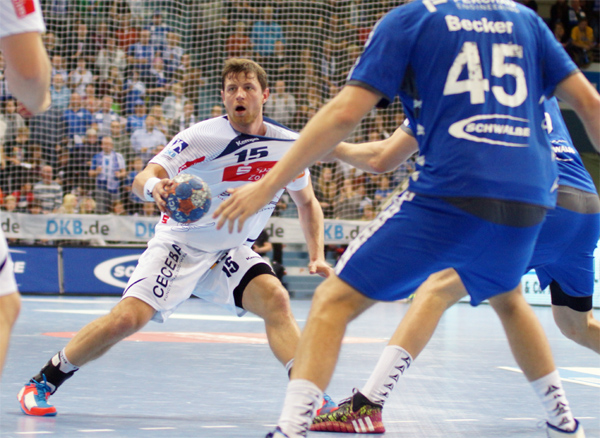 Inside HBL: Martin Strobel is “The Unimposing One”

When Jose Mourinho presented himself to the media during his first time with Chelsea, he called himself “The Special One”. When Jürgen Klopp got introduced as the new manager of Liverpool recently, he called himself “The Normal One”. Martin Strobel could easily be called “The Unimposing One”. He’s not a man of big words or gestures, instead focused on his job, which is being the head of his team on the court.

And when you ask somebody to name the best playmakers in the world, most of them would list players such as Nikola Karabatic, Aron Palmarsson or Domagoj Duvnjak. Only a few would even put Strobel into the conversion. There are many reasons why he is playing sort off under the radar. He started his career in the German Bundesliga at HBW Balingen-Weilstetten and re-joined the club in the summer of 2014 after five years with TBV Lemgo.

While Lemgo used to compete for national, and sometimes international trophies (Strobel was part of their 2010 EHF Cup winning side), Balingen has to fight against relegation ever since their first promotion to first-flight handball back in 2006. Strobel himself joined the league with big expectations, as he was named to the All-Star Team at both the U20 EURO in 2006 and the U21 World Championship in 2007. He made his debut for the German national team the same year.

But he had a tough time to adjust to the more physical playing style on a week-to-week base and when he joined Lemgo, a team full of stars especially in the early 2000s, he was seen as a perfect replacement for Markus Baur, the captain of Germany’s 2007 World Championship winning side. But those were big shoes to fill and the club was undergoing a huge make-over, financial problems almost caused bankruptcy.

So while Strobel had just started his career and was on the rise, his timing was a little off. But looking back at his time in the Lipperland, he calls it a “very important step for my career and the right decision at the time.” But did he meet all the expectations that experts and fans had put into him? While his critics would say no, he seems to be quite happy with his achievements.

During an interview with German handball podcast kreisab.de, he said: “I think especially the last couple of years have been quite good for me. There’s highs and lows in sport, that has been the case for me as well. But I was happy that I got many minutes in Qatar, that was a great experience and a lot of fun.”

In Doha, during the World Championship in January, Germany’s new coach Dagur Sigurdsson put him into the starting line-up. The team played a fast-paced style, caused some new euphoria back home and he proved all doubters that he’s capable of taking on a leadership role. He somewhat looked rejuvenated, although he’s still just 29 years old.

Strobel’s contract in Balingen expires at the end of the season and because it’s anything but certain that his club will stay in the league, it’s a sure bet that he will have enough offers to choose from. And another strong showing at EURO 2016 in Poland would help his case to establish himself as one of the world’s best at his position, even if most people wouldn’t notice.