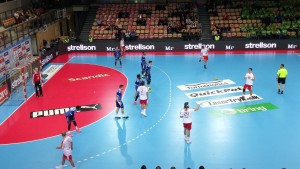 France arrived without the Karabatic brothers, but O’Meyer, Narcisse, Fernandez, Abalo or Sorhaindo is a part of the team preparing in Oslo.

Denmark has also a squad with some key players, Landin, Hansen, Eggert, Lindberg, Toft Hansen or Nöddesbö are all in the team. 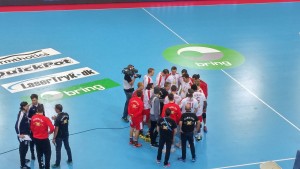 Interesting encounter between Denmark and France, balanced match, mostly Danish lead during the first half. Denmark leads 13-10, after Mikkel Hansen, Niklas Landin and Rasmus Lauge showed some exciting handball moments in front of a half full Nadderud Arena.

Second part of the game was spiced with several saves of Landin, Norwegian spectators was thrilled over a quality handball showed by the two teams. Th eyoung French team managed to work themselves back into the game and  the final result was 23 – 22.

First half where Norway are in lead during 25 minutes, Iceland equalizes at 155-15, before the break. In the second part of the match Norway took the control of the game, leading by four goals at 21 – 17, but Iceland came back and with fantastic performance of Gustafsson in the goal, managed to win the match, by one goal.