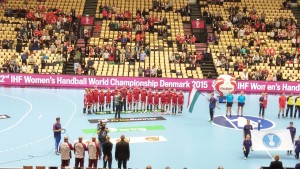 Hungary started the match by  making a good defensive job and scoring on leftback, rightwing, playmaker, and even if the Tunisian goalkeeper made some really highclass saves against Zacsik or Görbicz, Hungary leads comfortably 9-4 after twenty minutes.

Tomori, Zácsik, Szucsánszki, Kovacsicz or Erdősi managed to net all of them more times, meanwhile the African team had not many chances, only Chebbah seemed to have some ideas in front of the opponents defense.

Half time result is a clear 16 – 5 for Görbicz and company. 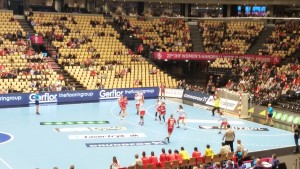 The second half the gap became even bigger between the two teams, Hungary had no problems to improve their attacking play, Tomori, Kovacsics and Görbicz increased their scorings, Tunisia managed also to improve their offensive play, Mouna Chebbah netted nine times, but Hungary won the game easily giving  the chance to all of the players to feel the start of the WCH.

Romania with an easy start
Spain had no trouble with Kazakhstan