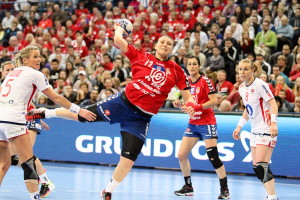 Always are players who are not able to participate in a championship, which could be due to happy circumstances or because of bad ones. The World Championship in Denmark is an important final tournament in order that it qualifies to the Olympic Games in Rio 2016.

Montenegrin Radmila Petrovic will be kept away from the court because of illness (mononucleosis).

Serbian players Andrea Lekic, Sanja Damnjanovic, Katarina Tomasevic and Dragana Cvijic will mis the WHC because of an ongoing conflict between them and Serbian headcoach Sasha Boskovic.

Katrine Lunde (Norway) is maybe the biggest name missing from WCH, the reason is that she got no place in Thorir Hergeirssons squad. Karoline Dyhre Breivang finished her national team career.

Anja Althaus and Kerstin Wohlbold were not considered good enough by Jakob Vestergaard to play for Germany, meanwhile Nadja Nadgornaja will not play at the WHC either. Thüringer HC’s right wing Svenja Huber left the national team after having conflict with one of the players, declaring that she is not respected.

Emily Stang Sando (Norway), gold medalist last year at ECH is not in the squad, Danish Susan Thorsgaard will miss the tournament because of an injury.

Least but not last, Danish playmaker Lærke Møller is kept out of court because of a new knee injurie.