Sakura Hauge-Kametani: ” The goal of my career is the Olympic Games” 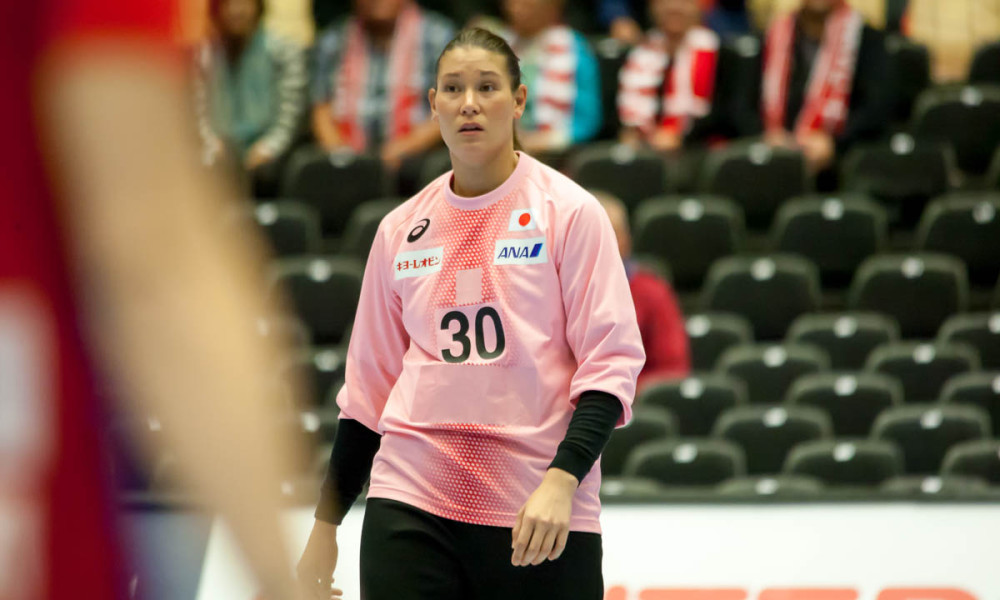 Sakura Hauge-Kametani: ” The goal of my career is the Olympic Games”

Herning: After the match between Serbia and Japan, won by Serbians, Timeout Magazine talked with Sakura Kametani, the new goalkeeper of Japan, who changed Norwegian national team hopes to reality, which is  the country of the raising sun – called Japan, and participation at the World Championship for the first time as a senior-player.

„My mother is Japanese and my father Norwegian, I was born in Bergen and I am as Norwegian as Japanese with double citizenship.The Japanese Federation has contacted me last year first, but I decided only this summer after I was in Japan to be known with circumstances. It took a little time to be able to decide, but I was thinking that after all I can experience an another training culture and not last to participate in a WCh and maybe Olympic Games.

About integrating into the team

„They were  very welcoming and accepted me quickly, so I have only nice memories about that. I was before in Japan many times and the culture is not very unknown for me, but is different, I have to say. I speak Japanese, I can made myself understood, so I don’t have problems.

My name is my moms name, that is you can read on the teamlists.

About the differences between European and Japanese training culture

„ The Japanese trains a bit differently than we here in Scandinavia do,  when it comes to strenghth, and do much longer handball practices. I think the difference might be first of all about the composition of the body, that’s why is different. 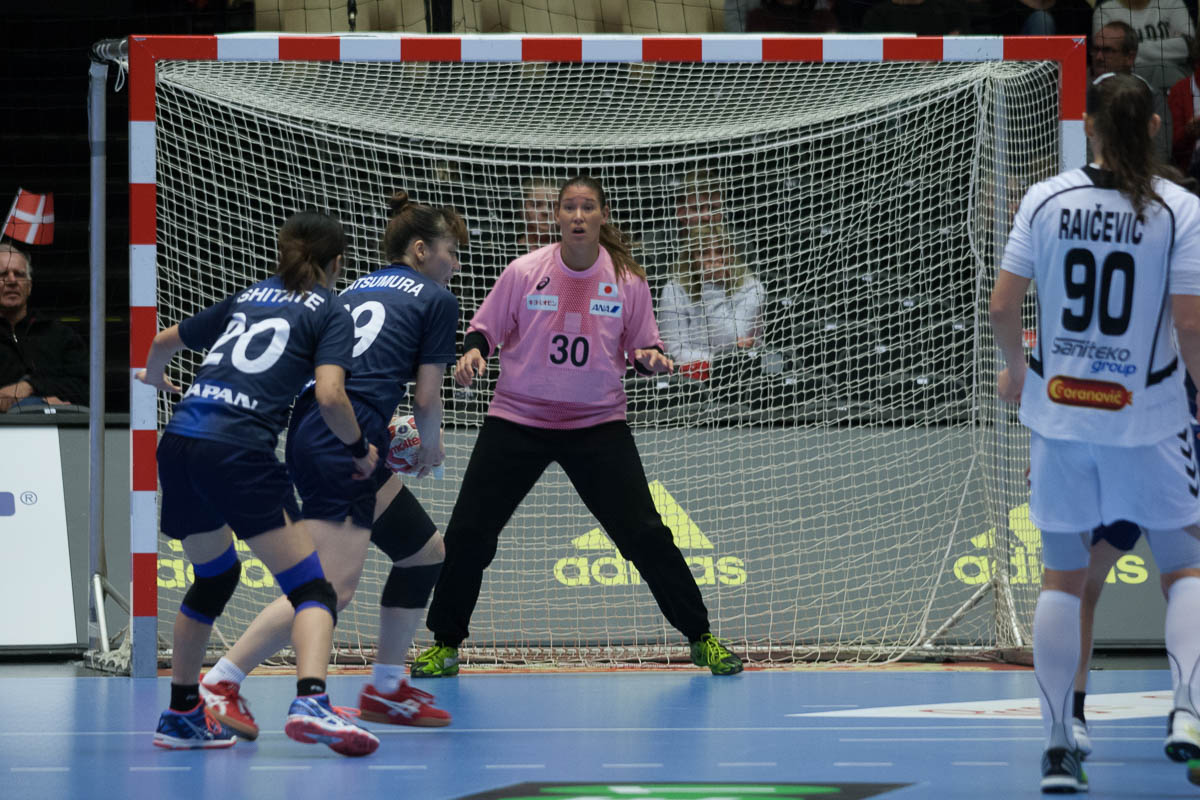 „Very nice girls, but almost none of them speaks English, so I am forced to practice my Japanese here, which is a good opportunity for me, to improve my language skills.

„ Of course the culture is different from the European, I am also trying to respect that even if sometimes is harder, but generally I feel really good with the team.

„My coach speaks English, so there are no misunderstandigs either.

About experiencing a World Championship

„ This is huge! Actually I was waiting many years to be able to that, first of all as a Norwegian player, but I  slipped further back in the ranking every year, in Norway there are many good, high qualified goalkeepers and the possibility to reach my goal, to participate at Olympics once in my career seemed to be blown away.

„Here in Denmark at the World Championship I had the possibility to show myself and to do my best against top players of the world, players I have never met before, never palyed against such teams. This helpes me also to improve as a goalkeeper.

„I can say that on the first hand this was the main reason why I took this decision. Originally, as a younger player I had a dream about participating at the 2012 Olympics. It was not meant to be, and I think that an opportunity like this is coming once in a lifetime.

( Sakura Hauge was member of the Norwegian junior team which won the silver medals at World Championship in 2005. She shared that time the goalkeeper position with nobody else than  Kari Aalvik Grimsbø, who managed to get into Norway’s national team and to stay in the squad for many years)

About Japan’s chances for the Olympic games in Rio

„We had already a chance in the Asian qualification, we beat China, but were defeated by South Korea. We hope for the best, to be able to get into another qualification round with the European teams.

About Japan performing in the World Championship

„I feel that we did lot of great things, and for exemple against Serbia (the interview was taken after Japan-Serbia) we could do better. We played an even match, the result was tight longer periods, we were chasing them, but lack of concentration made that we lost this encounter. My team is practicing an offensive defense, which takes a lot of energy and concentration and sometimes players got tired  especially mentally in the finish of the matches. 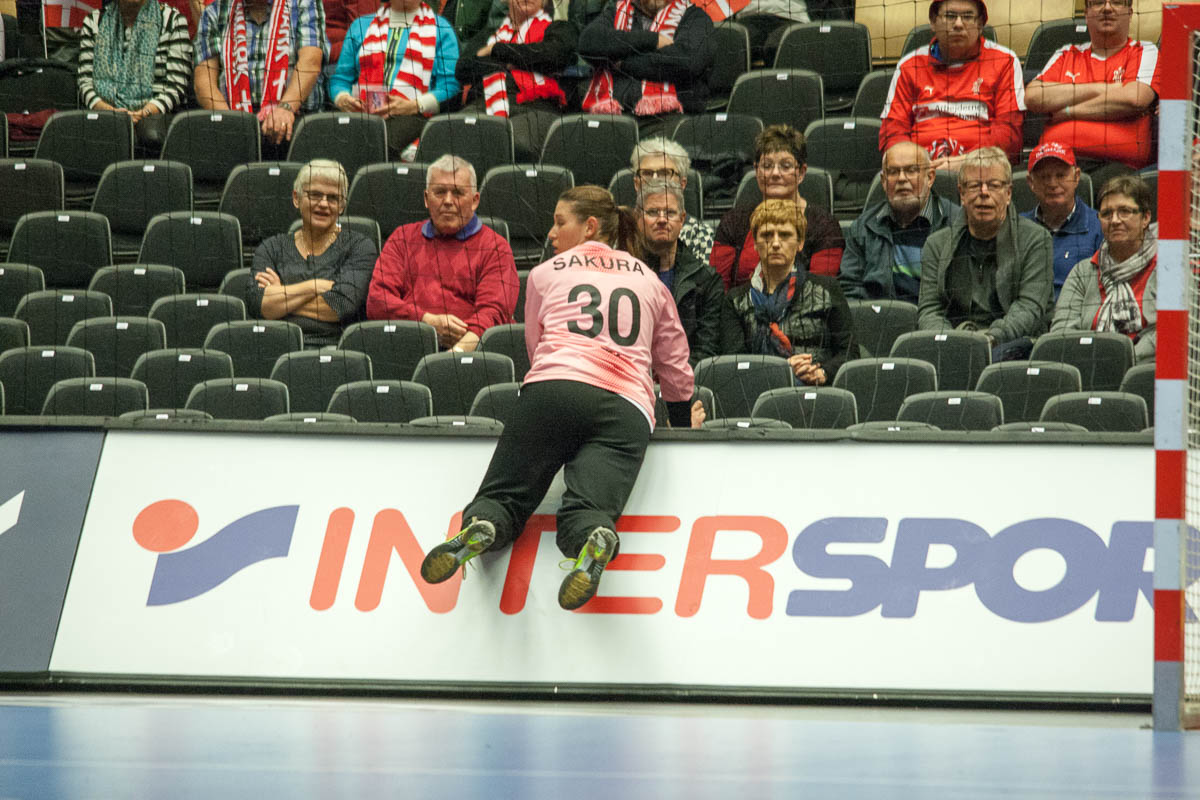 About her performance and skills (Sakura is first choice for Japan)

„I feel that I had some great matches, I can help the team, but it could be improved. I start matches because I am a goalkeeper which is used to European and Scandinavian shooters, easier for me to read and analyse  players from teams outside Asia, due to a different goalkeeper school.

(Sakura is in top 20 on the goalkeeper ranking of the WCH2015, on 17th place alongside Sandra Toft with a generall percentage of savings at 35% after four matches. She saved also three seven meters throws from ten, this put her onto the fifth place on the 7m penalty saves-ranking-source:ihf.info-before the last group round)

Sakura is not the only ex-Norwegian goalkeeper which changed the country she will play for, Alma Hasanic took a similar decision, when she became Montenegrin goalkeeper. The two keepers faced each other in the encounter Montenegro-Japan already in the Group phase.

„ It was interesting to meet Alma and to play against her in this game. We has played in the same club for more years, in Oslo, Nordstrand. I was not surprised when I heard that she took this step, totally understandable choice.

About plans of Sakura

„ I am 28 years old, and if my body allows i would like to continue until 2020 Olympics which will be held in Tokyo, Japan! And the World Championship in 2019 it will also be organized by Japan, so I am looking forward to that. It was my dream all the time, it would be a fantastic , a crowning of my career as a handball-player.