After a close first quarter when the two teams could not run from each other, Spain managed to take the lead and make some difference due to Nerea Pena, Carmen Martín or Eli Chavez.

Spaniards  had also Silvia Navarro, who had one her best first halfs in this tournament,  helping enourmously her team.

Allison Pineau kept the French team in the game in this period, like a real leader. 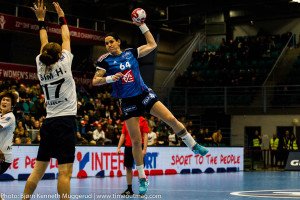 In the second part France came to the court with more motivation, Gnonsiane Niombla and Alexandra Lacrabére was unstoppable in attack, meanwhile Nerea Pena held the level on the other side.

Carmen Martin got a direct red card after 45 minutes played, fact which put a break to the Spanish team.

Spain still had the lead,20-18, but France leveled the game and draw was the result five seconds before the end, when Pineau made a breakthrough and got a penalty.

Seven meter throw after regular time-Lacarbére did not miss and France is in quarters.