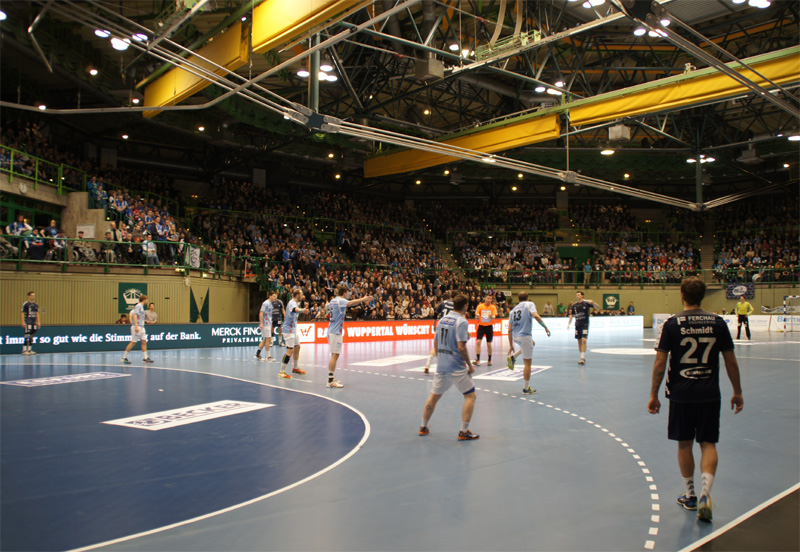 For some reason the games between the Bergischer HC and the VfL Gummersbach have become a classic, although the BHC 06 is far from being a well-established team in the  DKB Handball-Bundesliga. But since only 45 minutes seperate the venues the matches have become quite emotional. Today the game in Wuppertal added to that tradition, as the guests took home two points with a 23:22 (9:12) victory.

Gummersbach had huge problems to create scoring chances against a tough Löwen defense especially in the first half, as a very offensive 3-3 formation caused a lot of trouble for the team or Emir Kurtagic. But once Julius Kühn got more playing time of offense things changed, although BHC Björgvin Gustavsson played outstanding and made sure his team would talk a 3-goal lead into halftime.

After the break the hosts had a golden opportunity to go ahead by four, but line-player Max Weiß wasn’t able to control a pass on a fast-break, touched the ball with his feet and the chance was gone. Gummersbach stayed calm, especially young playmaker Simon Ernst showed all the calmness in the world and led his side to a wildly celebrated comeback after, to say the least, a quite entertaining crunchtime.

The VfL was one man down in the last minute of the game and up by two goals, when Alexander Becker was sent off. Arnor Gunnarsson cut the deficit to one with 49 seconds on the clock. Gummersbach then took a time-out with 29 seconds to go. With a bit more than ten seconds remaining and in need of a shot (passive play warning) the hosts committed a very stupid foul and the guests were able to run down the clock, after Max Weiß was suspended.