Vote for the IHF Handball Coaches of the Year 2015 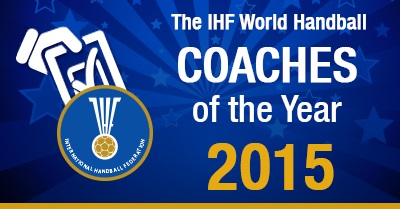 Vote for the IHF Handball Coaches of the Year 2015

The past year was full of surprises and we could see that a lot of teams have grown, not least because of some outstanding coaches. A group of IHF experts propose 5 coaches in both the men’s and women’s category who they consider to be the best of the best. As of today and until 28 March 2016 handball fans and sports media all over the world have the chance to vote for their World Handball Coaches 2015.

In the women’s category, two regulars made it again – and one of them was awarded World Coach of the Year already three times. But it will not be easy to choose as the other coaches led their teams to excellent results at the Women’s World Championship in Denmark as well. The nominations are:

In the men’s category there are even two former World Coaches who have made it on the list again. They are going up against the former Poland coach and two young, talented coaches who were in the focus of attention especially at the 2016 EHF EURO but can also look back on a successful year 2015. The nominations are:

The winners will be announced immediately once the voting is finished.

Sjöstrand to miss up to a month
PPD Zagreb against Vardar, Veszprem against Meshkov Brest on SEHA “Final 4”