Surprise: Savehof ran with the victory from Larvik 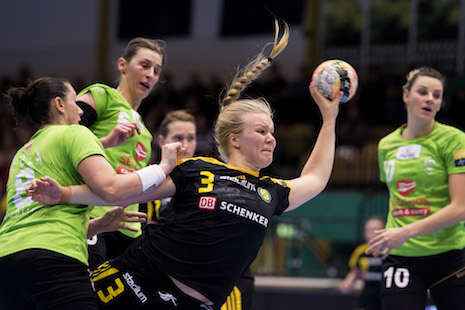 Larvik HK is hosting IK Savehof in the second match of the group. Hosts are playing without an injured Hege Löken, the newcomer rightwing, she has a knee injury (ACL ), so is out for a longer period and will not be able to help the team this season. IK Savehof has also an injured player, Johanna Ahlm is out with the same type of injury.

The first half started with a balanced first ten minutes, 4-2, 5-5, 5-6, 6-7. Sandra Toft had an amazing day in the goal of Larvik, and Riegelhuth-Koren seemed to be back in old herself, scoring from every chance she got here. Tine Stange and Thea Mørk were also important bricks of the offensive game for hosts, on the opposite side Savehof was led by Ekerman-Fernis, Oden and Sand. After 10 – 10, Larvik shook off the start emotions of the first game and  ran from the Swedish team, finishing the first half 14 – 10.

The second half started as the first half ended, Larvik scored and was in lead at a three-four goals difference , 18-15 (40.minute). This showed to be a crucial period, because Savehof made  a 3 – 0 ( Roberts twice and Sans)  in five minutes and leveled the game at 18-18. Larvik took back the lead at 21-20, but this was the last time in this match. Swedish team leveled the game one more time, 21-21 then grabbed the lead at 21-22, which they never slipped out from their hands until the match ended. At the final whistle, the result was 22 – 25.