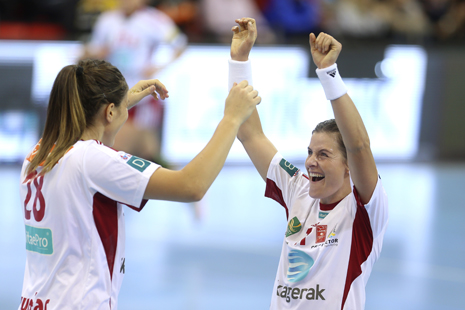 Group D had three teams with four points before this game: Team Esbjerg, IK Savehof and Krim Ljubljana had four points, Larvik only two, earned one week ago in Esbjerg.

This match looked like a rollercoaster in both halfs, where every ten minutes there was ac hange in the game, one of the teams managed to take the control, but none of them could keep the level during the whole match. These ups and downs has brought a lot of mistakes, turnovers and many scorings on both sides.

In the first half Frafjord had a very good period, scoring important goals, as well Riegelhuth-Koren on rightwing was efficient. Esbjerg’s hopes was kept alive of Polman and Vestergaard in attack, tis match was not one of defences. First half ended with a two goals advantage for the Danish team 15-17.

In the second half Larvik leveled the game quickly, 17-17, than took the lead, but Alina Wojtas got a red and blue card combination after touching Polman in attack and the athmopshere became somehow very tensed on the court. Players, coaches and referees made many mistakes and nobody seemed to have the control of the game. Larvik had the advantage for longer periods, then Esbjerg made a comeback despite fullish punishments of headcoach Fredriksen and Polman and 30 seconds before the end the result was 29-29.

Larvik had the ball, Tor Odvar Moen called his timeout, the planned tacic did not workout but a cool-headed Gro Hammerseng-Edin scored in the very last second of the match, keeping the very important points home in Larvik.