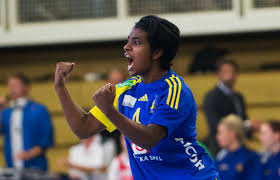 So far, Serbia could be considered as the surprise team of the tournament. Their win against the Slovenians was no surprise but the way and the confidence they defeated Spain was not expected before the EHF EURO 2016. On the other hand, Sweden started with a more than convincing victory against Spain but their second round defeat against Slovenia was one of the biggest surprises of the tournament. However, Sweden seemed to get lucky because Spain defeated Slovenia and with this result, Slovenia said goodbye to the tournament – this means Sweden will not take this defeat to the Main Round. The first half of the match proved why Serbia can be considered as the surprise of the tournament because after the tight first 20 minutes, Serbia – even losing Jelena Lavko in the first minutes – was the first team to open the gap between the two sides (11-17) which put Sweden to a difficult situation regarding the outcome of the match. Sweden even missed penalties against Serbian keeper Jovana Risovic, and even though the final minutes of the first half were better for Sweden, the half still ended with a Serbian lead (15-18).

In the beginning of the second half, Serbia stabilized the advantage again. Later, with some spectacular moves from Sweden’s left wing, Louise Sand, Sweden was running close behind Serbia (19-21). In these minutes, Serbia seemed to become a little less confident than before, making some easy mistakes. After a little more than 40 minutes played, Sweden managed to equalize with a goal from Nathalie Hagman. The match was similar to the match between Netherlands and France, but with a lot more goals. Even though Serbia was holding the lead constantly, Sweden didn’t help them get away with the two points easily. The Swedish crowd went crazy when the home team grabbed the lead in the final minutes, but a hammer from Kristina Liscevic in the last seconds found the way into the net. The 4th encounter between Serbia and Sweden ended in a draw – and so did the first three. This time we can say that both teams saved a point: Serbia because of the last minute lead of Sweden, and Sweden because of being behind during most of the match. Both teams will take 3 points to the main round, while Spain will continue without a point. Slovenia, despite the good efforts they made during the tournament, will say goodbye to the competition.