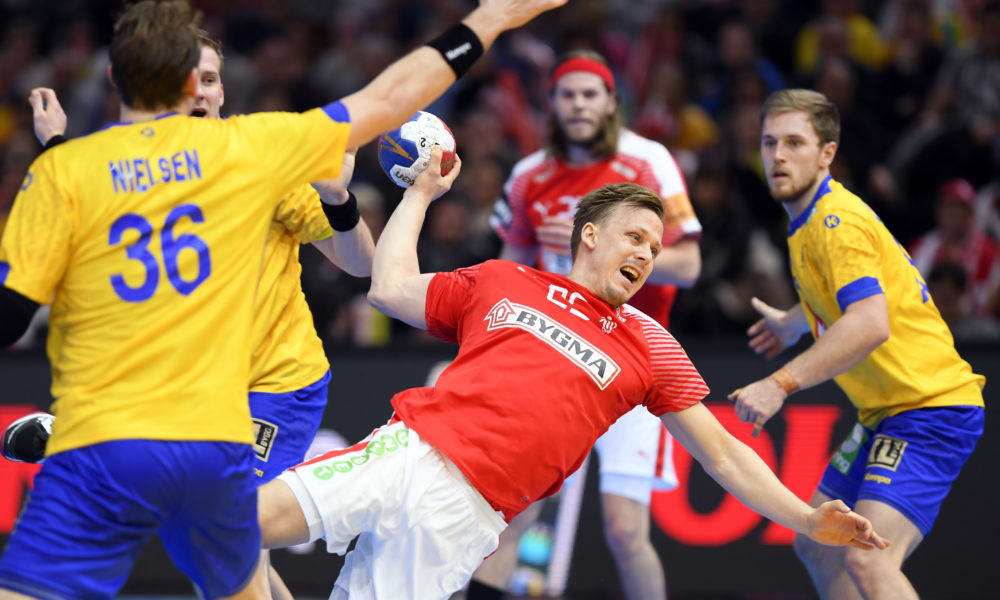 Henrik Toft Hansen was the first scorer in the match between the two scandinavian teams. It took nearly three minutes until the first goal. Until then both sides missed a lot of chances and also both keepers, Landin for Denmark and Appelgren for Sweden, had some good saves.

The teams scored goal by goal with some advances for the Danish team, at half time they were leading by 14:10. But the strong Swedish team came back right after the break with three goals from the player from Kiel, Niklas Ekberg, He scored three times in a row until 13:14 four minutes after half time.

Until the end it was a close match that also was not irritated by two doves flying through the arena and leave ther excreta on the court in front the the danish goal, so the volunteers had to clean the floor….

Because Niklas Landin had a nearly perfect day (48% save rate), the great fighting of the young Swedish team at the end was not rewarded. Sweden lost with 25:27 but showed that they have good chances to play an important role at these Championship.

“We did a strong performance today. We created a lot of shooting opportunities but our effectivness was not as good as it has to be to beat the Olympic gold medalist,” Swedish coach Kristjan Andresson said right after the match. “Congratulations to Denmark.”

Gudmundur Gudmundsson also gave a big hand to their opponents. “I want to thank Sweden for this excellent game. It was a very tough match for both teams. We were the lucky winners. We played very well in the first half,” in which Denmark was leading short before the whistle with 14:8. “Sweden also played good, but we played bad at the beginning of the second half. So Sweden was very close again and it was a very difficult game. I am very satisfied with my team and at the end we were a little bit lucky I have to say. I am very happy with the game.”

The player of Sweden Frederik Petersen and Magnus Landin, the younger brother of Niklas Landin, from Denmark gave a big hand to the audience in the arena. “The crowd was very good. There were a lot of fans of both teams. Its always good if there is such an audience,” Petersen told. “It is fantastic. The crowd was amazing today. It is alsways nice to play in such a crowded arena,” Magnus Landin added.