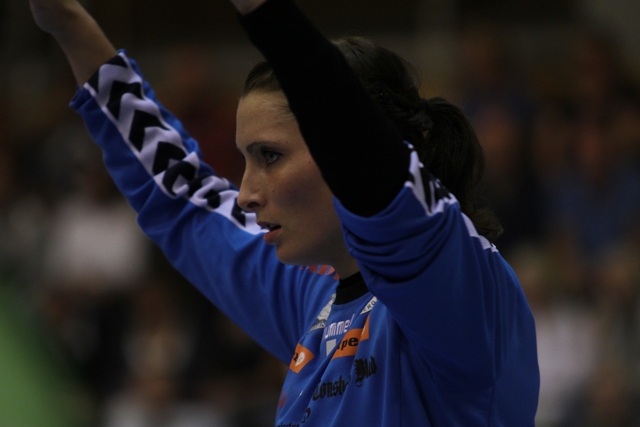 FC Midjylland had to tavel to Esbjerg in order to play CL game against Team Esbjerg this Sunday. In the last weeks the two teams has met several times  each other and those matches were won by FCM. Today Esbjerg wants a revenge, which could be very painfull for their rivals, as FCM wants to get the best possible position in the Main Round group before quarter finals.

In the first half of the game there was a close race, Englert kept a high level in the goal, Veronica Kristiansen had several scorings for FCM, but Team Esbjerg was driven by the home crowd and after 8-8 they managed to take the lead and control the match both in defence and in attack. Jenny Alm, Ulrika Toft Hansen and Emily Stang Sando were the players to remark from the hosts after the first half, which ended 14-11.

In the second half FCM managed to equalize the result 14-14 and in the first seven minutes hosts did not manage to score in Englert’s goal, this was the best moment for an Esbjerg time-out. FCM took the lead 14-17 afterwards, but Team Esbjerg fought back and equalized 17-17, than took the lead due to Laura van der Heijden at 18-19. From this point Team Esbjerg did not let the lead out of their hands, Emily Stang Sando made some vital saves, her team increased the lead to 18-22 and the victory seemed to be a fact. In the dying minutes FCM managed to close the gap to 22-21 after several mistakes from the hosts, but Team Esbjerg won the match, collecting their first points  in the Main Round.