One goal victory for Metz against Győr in the quarter-final 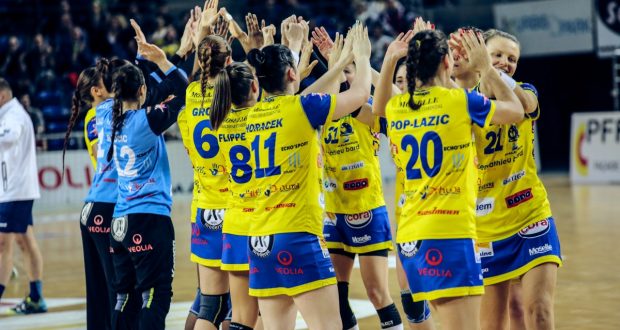 photo: Metz Handball
One goal victory for Metz against Győr in the quarter-final

Everyone was talking as favorites about Győr against Metz in the quarter-final encounters, which started in Metz with the first leg. Győr arrived in France after a loss in the final of the Hungarian Cup against FTC, and had struggled with injuries on several key players as Yvette Broch and Jana Knedlikova. The play of the two was not certain until the last moment of the warm up before the game against Metz.

The two teams started with a  quick goal show, where Metz took the lead 2-0, but Győr equalized and after 12 minutes the score was 7-7. Then several effective moves of Tomori put Győr in position, 7-9 for the guests. Despite two goals lead, during the first half, Győr’s play seemed to not work. Their defense was not as compact as Metz’s defence was and in offence they did not find the rhythm, trying to replace the collective, team play with individually solutions. Therefore the match was close, Metz had the lead also several times and Ana Gros seemed to be unstoppable. Metz had another ace to play, when Glauser showed her class in the goal, saving seven meter, clear chances and distance shoots as well. The first half ended 16 – 16.

In the second half Metz took the control of the game on both ends of the court and the lead came with this. Gros, Zaadi, Pop-Lazic and Glauser led the French champions. Győr seemed lost, the team of Ambros Martin made many mistakes in attack and could not stop the good flow of Metz attacks. 21-19, 23-20, 26-22 – some results during the second half, when Metz was in advantage .

The turning point of the game came when Grimsbö was replaced by Kiss in the goal, who contributed with several important saves in key moments, and Görbicz took the playmaker position, so the play got back its flow. Nora Mörk found her shooting arm, Tomori shined in her old light and Yvette Broch was back on track for Győr. Three minutes before the end Mörk managed to level the game, 30 – 30, Győr showed an impressive fighting spirit, but this was only enough for an one goal defeat, 32-31 for Metz. Second leg promisses lot of excitement in Audi Arena in Győr.

The last run for Budapest II.
Vardar closer to Budapest