Hungarian League: who will stop Győr? 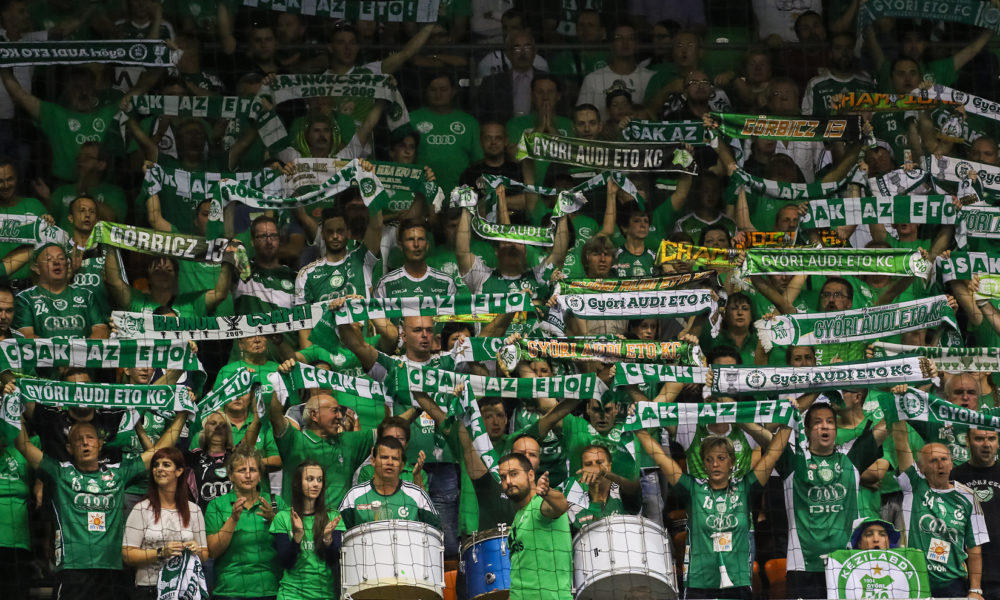 We have entered September and autumn is just around the corner. This means slowly handball competitions are returning and this means a pure joy for many handball fans all around Europe. The world’s probably strongest (and richest) women’s handball league, the Hungarian K&H League is officially starting tomorrow with the match between defending champions Győri Audi ETO KC and DVSC-TVP.

Nowadays, the Hungarian league is considered as the world’s strongest national competition. After the economic failure of several Northern and Western teams and leagues, club handball started to bloom in the Middle and Eastern European countries. This is clearly shown by the tendencies of the best Champions League teams each year: while in many occasions in the years before 2010, Győri Audi ETO KC was representing the “Eastern” part of Europe, nowadays, Győr is the most “Western” and “Northern” club among the leading forces of European club handball. As an example, last season, Győri Audi ETO KC was competing with CSM Bucuresti, ZRK Vardar and Buducnost in the FINAL4 of the EHF Champions League – all of them to the East and to the South of Hungary. In this “easternisation” of the past few years, the Hungarian League stood up as the financially most stable national competition in Europe. It has attracted several players from all around Europe and this means the increasing number of foreign players in the Hungarian league. While the Hungarian club handball is living maybe the most successful time ever – Győri Audi ETO KC won the Champions League 3 times in the past 5 years and Dunaújvárosi KKA added an EHF Cup gold medal to the collection -, the adult national team seems to struggle in the big international competitions. As a reaction to this tendency and as an attempt to stop the flow of the foreign players, the Hungarian Handball Federation made a rule that handball clubs with more than 4 foreign players in the squad have to pay 5.000.000 HUF (~16000 EUR) for each additional foreign player. However, this new rule didn’t stop the clubs in contracting foreign players: this season will start with the highest ever number of foreign players in the Hungarian league (71, compared to last season’s 66). Budaörs is the only team in the Hungarian league to build on only Hungarian players, all the other teams have at least 2 non-Hungarians in their squad. 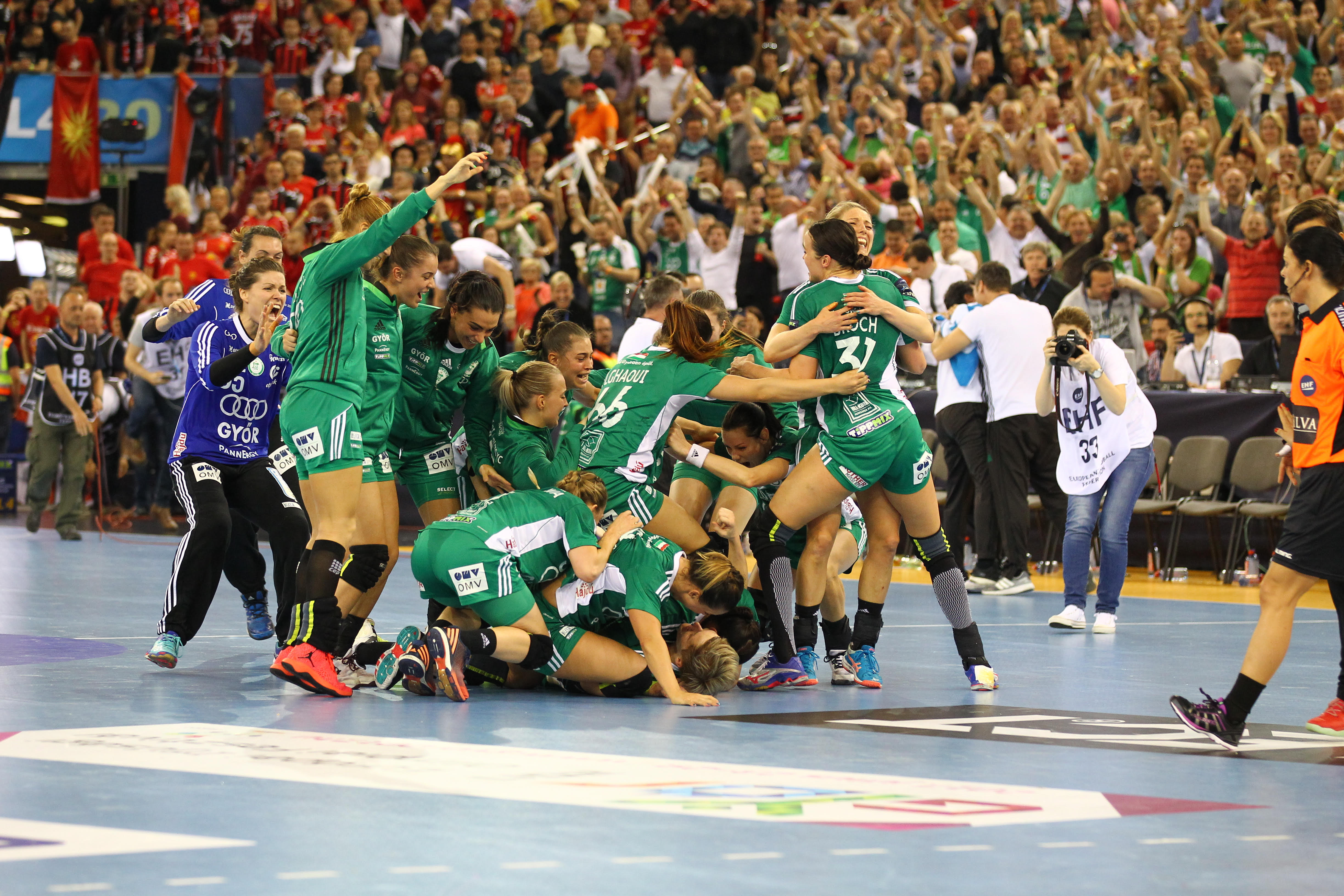 Győr is clearly aiming for the treble. | Photo: Zsolt Halmágyi

Last season, Győri Audi ETO KC won the Hungarian league with 25 victories and 1 draw in 26 matches, FTC-Rail Cargo Hungaria came in second and won the Hungarian Cup after 12 straight victories from Győr and ÉRD took the bronze medal. Mosonmagyaróvár and Kispesti NK were relegated to the second division, while Vasas and Kecskeméti NKSE won their respective second league (NBI/B) divisions and have earned the right to compete in the top league of Hungarian handball. Let’s take a little look at the most important transfers and the expectations ahead of the start of the Hungarian League.

Győri Audi ETO KC made some important reinforcements during the summer break which means that the defending champions seem to head for the desired treble, to win the Hungarian league, the Hungarian Cup and the Champions League as well. Győr took Stine Oftedal from Issy Paris, Anne Mette Hansen from Kobenhavn and Anja Althaus from ZRK Vardar in order to be able to stand up with two complete lineups. Győr has sent several young players like Dorina Korsós or Júlia Hársfalvi on loan in order to collect experience with more playing time on court, some other young and talented players got the chance to prove themselves in the adult team, while their biggest loss was Heidi Löke: the Norwegian world class pivot returned to Norway, but this isn’t anything new for the Hungarian superpower: they had to solve the biggest part of last season without Löke due to her maternity break. Looking at Győri Audi ETO KC’s lineup for the season, it is hard to imagine anyone taking their crown in the domestic league.

Despite the reinforcement of the rivals, FTC-Rail Cargo Hungaria still seems to be the biggest competitor of the green-whites from Győr. FTC managed to take the Hungarian Cup from Győri Audi ETO KC and the team from the Hungarian capital Budapest reached the quarterfinals of the EHF Champions League. This summer, they added Laura van der Heijden to their squad and the Dutch right back really seems to add quality to FTC’s game, as proven in the preparation matches. Besides van der Heijden, FTC recalled two youngsters, Noémi Háfra and Gréta Márton from loan from MTK Budapest. However, Szandra Zácsik left the team in the second part of the summer so team captain Zita Szucsánszki will postpone her baby project with at least a year to help her team. At the moment, Szucsánszki is recovering from her shoulder injury suffered in April, but she is expected to be fit for the start of the Champions League. 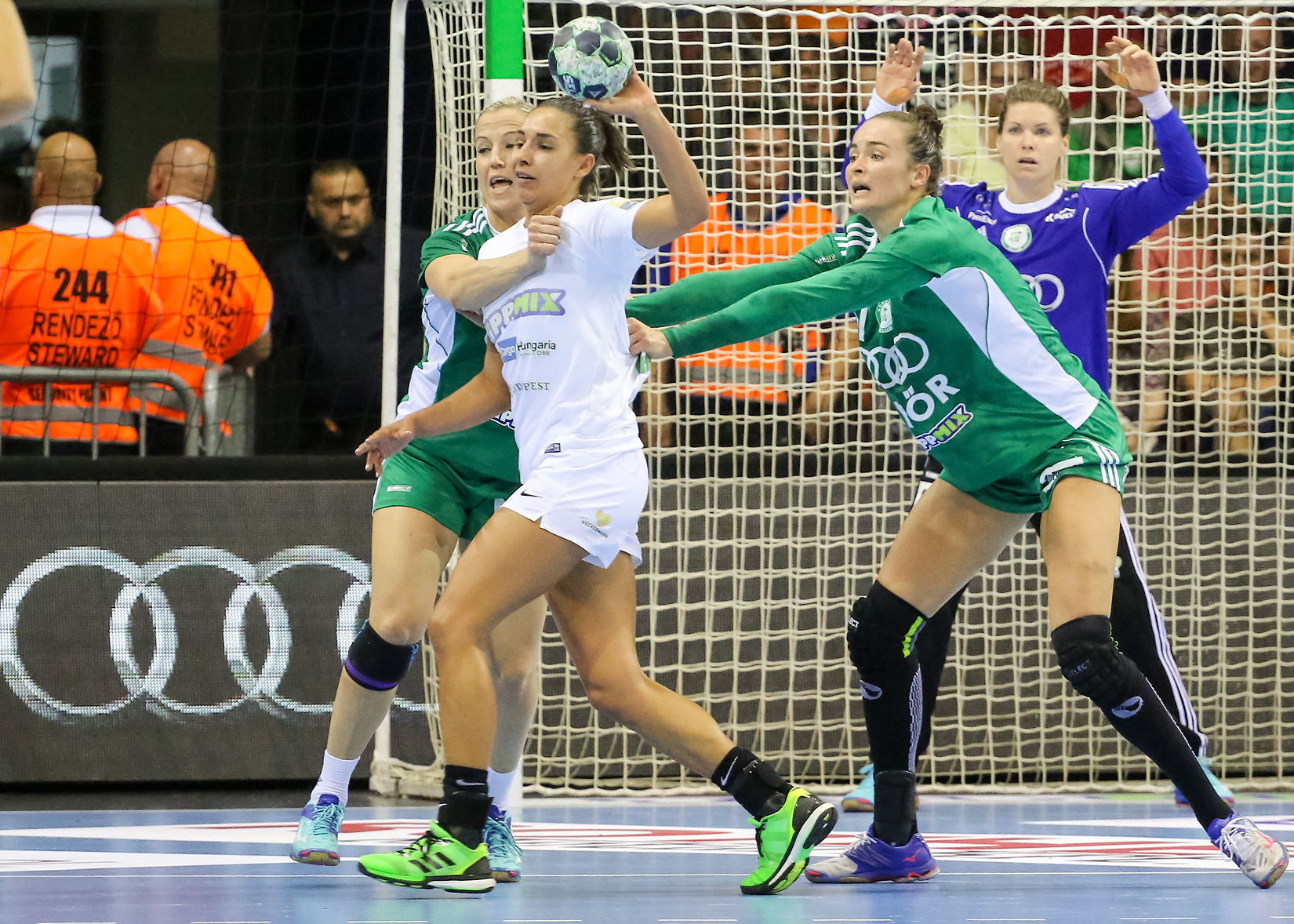 Szucsánszki is back to save the day at FTC. | Photo: Tamás Csonka

It seems the main medal contenders will be ÉRD and Siófok. Both teams signed quality players during the summer and looking at the squads, they might be closer to FTC than ever before, but the experience in the deciding situations is still on FTC’s side that puts them ahead of the two challengers. ÉRD has constantly reached the podium in the past years, and they won’t give that medal away easily: they signed players like Jamina Roberts, Gabriella Tóth or Coralie Lassource to at least save their positions on the podium. They have lost some players during the summer, but the key players stayed in ÉRD so with the new signings, they also plan to move forward in the EHF Cup. Siófok has set the goals to reach the podium and with that, a place in the international competition, and their squad seems to give them the chance to dream that big. Despite the departure of their best scorer Krisztina Triscsuk (Kisvárda), Siófok can definitely be called stronger than last season. Internationally outstanding players like Sanja Damnjanovic, Gabriela Perianu or Denisa Dedu have arrived to the capital of lake Balaton. During the preparation, they made a 30-30 draw with Győri Audi ETO KC, and if nothing else, this means something…

In the medal fights, Dunaújvárosi KKA, Váci NKSE, DVSC-TVP and Alba Fehérvár can play an important role. Considering the chances for a medal, these four teams seem to be a bit below the teams mentioned above, but in their good or bad day, they can be a deciding factor between the top 4 teams of the league. From these four teams, DVSC seems to have made the best signings during the summer break. They signed Lotte Grigel, Madalina Zamfirescu, Arna Palsdottir and Júlia Hársfalvi as the main names, and despite the departure of players like Jelena Despotovic (Krim) or Marija Garbuz (Kisvárda), they will make a solid team, supported by one of the most passionate crowds in the Hungarian league. Dunaújváros reactivated the experienced Katarina Tomasevic after maternity break, took Anita Kazai from their direct rivals Alba Fehérvár and they also signed some young Hungarian players: Orsolya Monori, Luca Dombi, Fruzsina Bouti and Luca Szekerczés. Vác let some important players like Sonja Basic, Bernadett Temes, Sara Vukcevic or Alexandra do Nascimento go, while others like Barbara Arenhart or Dijana Jovetic stayed. Former Hungarian international Piroska Szamoránsky returns from maternity break, while the signing of youngsters like Rita Lakatos, Bernadett Hornyák or the Hungarian-Austrian Patrícia Kovács can work either way. If the young players find themselves on the side of the Danube river, Vác can be a breath of fresh air in the Hungarian league. Brazilian world champion Karol Souza arrived to Vác last summer, but she suffered a serious injury in the beginning of the season, so she can be considered as a new player as well. Alba Fehérvár also lost some important players in the transfer period: Daniela Piedade went to Spain, Biljana Bandelier retired from handball, Ishitate Mayuko returned to Japan and some other players went to their direct rivals, but the signing of Olga Gorshenina, Yana Zhilinskayte, Sonja Barjaktarovic and currently injured Alexandra do Nascimento can add to the quality of the team.

Alexandra do Nascimento is changing between direct rivals: from Vác to Alba Fehérvár.

It is hard to tell what Kisvárda, MTK Budapest and Budaörs can do in this season. Kisvárda seems to be above the other two teams mentioned here: last season, they had to fight until the last rounds to avoid relegation and this season they don’t want to step into the same river again. Their summer transfers emphasize their will to avoid relegation fights. Internationally experienced players like Tamara Georgijev, Krisztina Triscsuk, Vesna Milanovic Litre and Marija Garbuz can take important roles in the East Hungarian team, but keeping players like Marina Dmitrovic, Adrienn Orbán or Samira Rocha can add at least as much as the new signings. Budaörs was the only completely Hungarian team during last season, and this season, it won’t be any different. They signed plenty of talented young Hungarians, but the arrival of Szandra Szöllősi-Zácsik or Flóra Sipeki can mean a lot for the team of one of the richest Hungarian towns. MTK Budapest wasn’t too active on the transfer market, but keeping the team’s kern together can be an advantage especially in the first stage of the competition.

Vasas, Békéscsabai ENKSE and Kecskeméti NKSE are hard to tell what they are capable of. Kecskemét reached a historic success winning the Eastern division of the second league so they can try themselves in the highest level of the competition in Hungary. They signed some players from direct rivals like Yulia Kucherova from Kisvárda, Olga Nikolayenko and Dóra Horváth from MTK Budapest or Orsolya Karalyos from Budaörs, but it is hard to tell what they will be able to do in their first season in the Hungarian league. Their main goal is to stay in the first division, but if their squad will be enough or not, time will tell. A few years ago, Békéscsaba was fighting for the medals in the league, but the past years have been a struggle for the South Hungarians: they had to fight to avoid relegation. This year, their goal has to be the same. They lost some key players like Ágnes Triffa (Kisvárda) or Szonja Gávai (ÉRD), and even though Adrienn Szarka can add some experience to the squad, they will have hard battles coming up in the upcoming months. Vasas is a traditionally very successful team, with a CL-victory and the record number of Hungarian league titles won by their side, so their return to the first division is nice to see. They aren’t going the usual way of newly promoted teams of changing almost the whole team: they didn’t sign too many players but the ones they signed, especially young Montenegrin Vanesa Agovic from Buducnost, can add to their level. 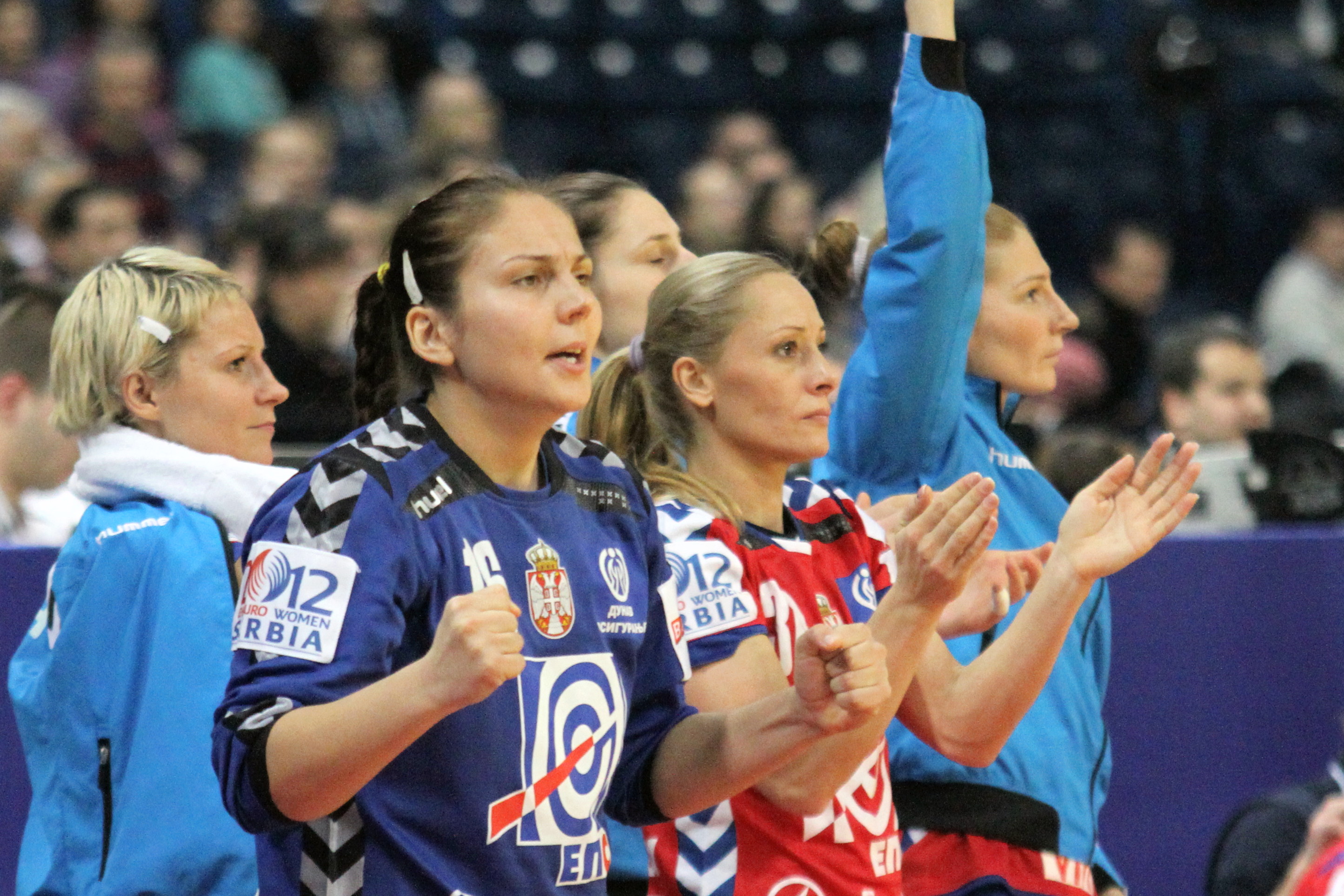 Jovana Risovic changed Randers’s shirt for the newcomers of the league Kecskemét.

As mentioned before, the Hungarian League is starting on 2 September, at 18:45 (local time, TV: M4 Sport) with a match between the champions Győri Audi ETO KC and Hungarian Cup bronze medalists DVSC-TVP. This weekend, this one will be the only match played, all the other teams will start the first round on 9-10 September. The 14 teams will play 26 matches each, and there is no playoff. The last day of the championship is 23 May 2018, and until then, 9 months of pure excitement is awaiting the handball fans in Hungary. Brace yourselves, fasten your seatbelts and get ready for the fun!