Burgaard was the hero in FCM’s win 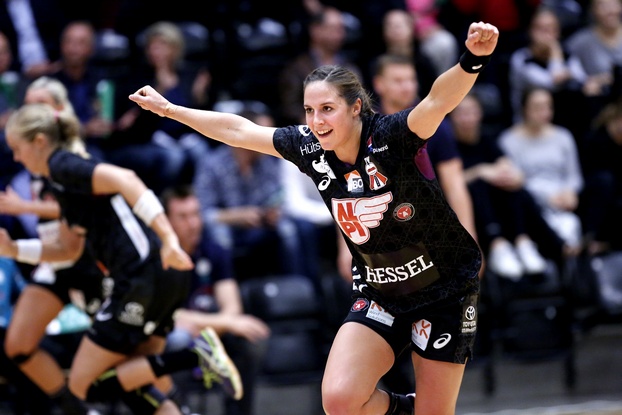 In the opening match of the 3rd round of the Women’s EHF Champions League, FC Midtjylland travelled to France to meet Brest Bretagne on Friday evening. In the last round, Brest lost to Győri Audi ETO KC at home, while the Danish team caused the surprise of the round and defeated Rostov in Ikast. Despite the better start from the home team, FCM slowly overtook the lead and had it in the biggest part of the first half. After 7-7, a 4-0 from the guests put them in front by 4 goals and the main names on the Danish side were Veronica Kristiansen and Louise Burgaard. From the 11 goals, these two players scored 9 together. From these four goals of advantage, they kept two for the halftime break (10-12).

In the beginning of the second half, the Danish team was in front by four goals again (11-15) but the periods within the match were changing quickly as five minutes later, Brest was back at one goal behind. After 49 minutes played, Brest equalized and a whole new match was starting for the last 10 minutes. For the first time after a long time, Brest overtook the lead (19-18) and their first win in the EHF Champions League was closer than ever. Yet FCM still had some turns left. With two minutes left from the match, the Danish team seemed to be in a good position with their two-goal-lead (20-22) but the home team didn’t want to give those points away easily. With an easy mistake from FCM and a quick fast break, Brest equalized with less than a minute left on the clock. FC Midtjylland still had a chance to win the match with a last action but these chances seemed to fade away as they were forced to take an overtime free throw. It was Louise Burgaard to take the responsibility, and she stood up to be the hero of the day. The Danish right back who celebrated her 25th birthday just a few days ago, scored a magnificent overtime free throw goal to collect all the two points for her team. Brest is still without a victory, while the Main Round is coming in reach for FCM.