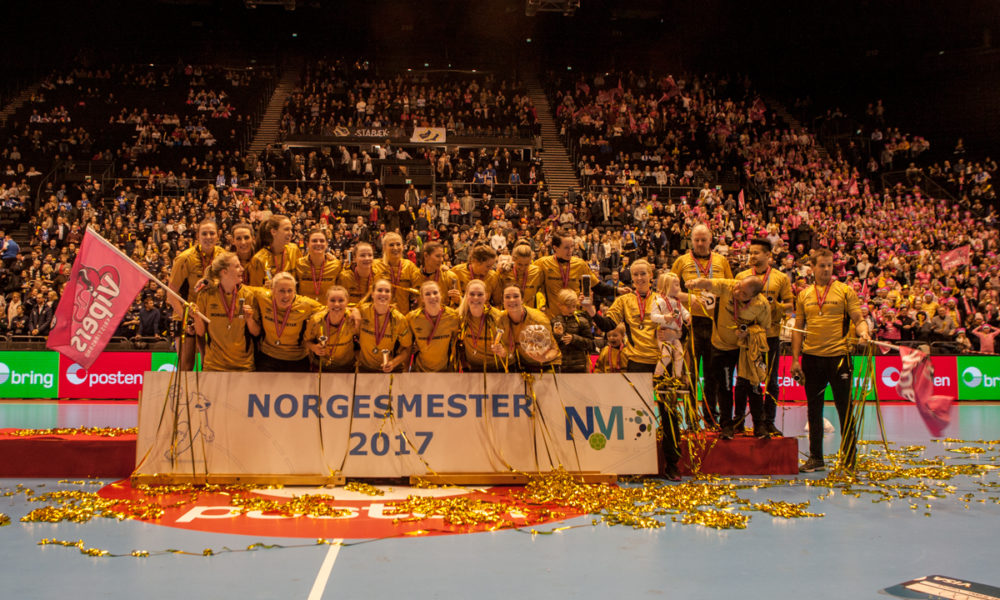 Every year in Norway there is a tradition that between Christmas and New Years Eve the Norwegian Cup finals are organized in Oslo Spektrum, both for women and men. The event starts the early afternoon with the finals of the junior women and men teams, then continued with the more attractive matches.

This year 29th of December was the day for the Norwegian Cup matches.

In the women final Vipers Kristiansand met Stabæk, which surprisingly eliminated Larvik in the semifinals with a young team. Vipers were the big favorite of this encounter with four players in their squad which just arrived from the World Championship, three of them with a silver medal for Norway, Katrine Lunde, Kari Brattset and Emilie Hegh Arntzen, and Sakura Hauge who played for Japan.

Linn J. Sulland was not able to start the match as she got a smaller injury in yesterdays workout and Malin Aune had been sick with fever in the last days and could not train. Despite this head coach Kenneth Gabrielsen was hopeful before the match as they will manage to get the title.

In the first half of the match an eager Stabæk team was causing trouble to Vipers, the young team of Pål Oldrup Jensen managed to keep the contact, stay close and even have the lead several times during the first half. Kristine Lunde-Borgersen showed her experience and slowly her teammates managed to come into the game and score, supported backwards by Katrine Lunde in the goal. The first half ended 12-16 for Vipers.

In the second half Vipers changed the gear to a higher speed, managing to get their fast-break play working and Jeanette Kristiansen, Malin Aune or Kari Brattset scored quick goals and Katrine Lunde, than Sakura Hauge stopped the opponents attacks and after ten minutes played the score was 14-25 for Vipers. There was no stop for the team from Kristiansand from this point, winning their first official Norwegian title with 17-30.