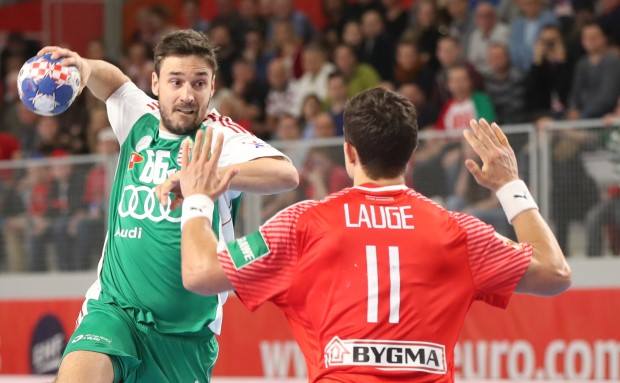 Hungary is building a new team, with young players and some experienced ones, like Lékai, Császár, Mikler or Schuch. Nagy has finished his national team career, but players like Balogh, Ancsin or Bartók will solve the right back position. The new head coach, Swedish Ljubomir Vranjes has a new concept and needs definitely more time to put together a good working team for Hungary.

On the other hand, Denmark with their head coach Nikolaj Jakobsen is also working on a new team, trying to introduce new, younger players in a championship, but mainstream are still the experienced players from strong club-teams.

In the first half after a smoother Danish start, Hungary fought back into the match and was in lead for a longer period, but Denmark won the first half 14-12. The most important Hungarian players were Lékai, Balogh, Bartók, and Bánhidi, the goalkeeper play was not on a high level in the first half, both teams were struggling with it. Denmarks best players were Lauge, Mikkel Hansen, and R.Toft Hansen.

In the second half, Denmark pushed the acceleration and never gave the lead back to their opponents even if Mikkel Hansen got his third 2-minute suspension and a red card. The Danish goalkeeper performance has improved substantially, Jannick  Green grow during the match and stopped numerous Hungarian shoots (50%). The biggest difference in the match was 32-22, but Hungary managed to reduce the difference in the last five minutes of the match and the final result was 32-25.