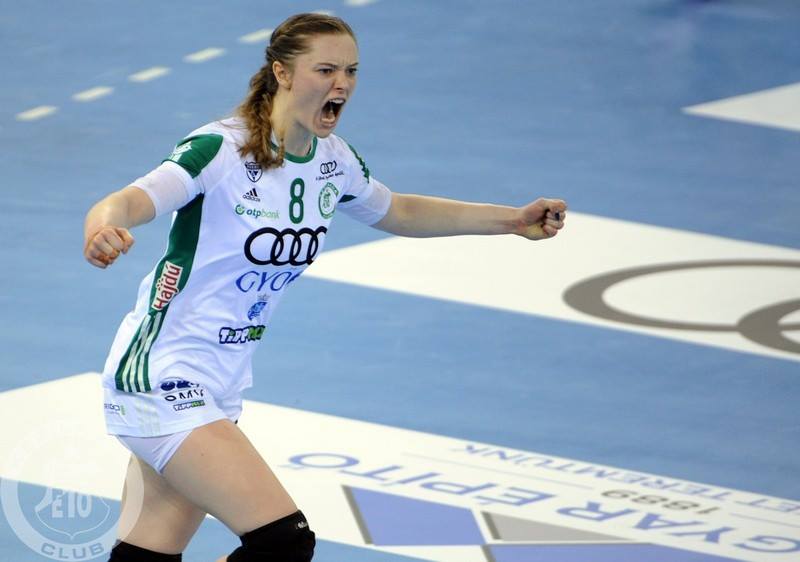 Anne Mette Hansen is playing her first season in the Champions League after she transferred to Győr and she is really happy to experience these games and how is it to be qualified to the EHF Women’s Champions League Final 4. She had a long-term injury at the start of the season, but she is fully recovered now and able to help her team wherever is needed. She arrived in the interview zone with a bunch of Hungarian chocolate in her hand, gifts she got from the fans of the team. After ever match players get a lot of small gifts from the supporters, this is a tradition in Gyor.

“It was a difficult game, we obviously wanted to get the victory, but you cannot lock out from the minds that we were already in a six goals advantage from the first leg. We had problems in the defense and we could not stop them as we planned, so we made the match somehow exciting. We did not show our prettiest handball but we fought and won as a team.

About her performance –  with a big smile on her face

” I usually have a bigger role in defense lately and I had really wanted to show myself in the offensive phase as well, as I consider myself a two-way player. In this match, I have got some good chances and I really wanted to help the team in order to get the victory. I am happy that I was able to score the goal of the victory and we could thank our fantastic fans that they are always supporting us everywhere.

” Oh, this is something very new for me, but I can feel how important and challenging is it, to be in a such a great team and be able to fight in the EHF Women’s Final 4. This will be my first time and I am very excited, it will be a totally new experience. And of course, if we are there we don’t want to lose…But before that, we have other tasks to focus on and to work for!

About her feelings to be in Győr

” I was thinking that it will be difficult to integrate and adapt as this is a totally different culture, different language, and different training environment. Luckily there are some Scandinavian girls here or those who are speaking Danish, which made it much easier for me to get used to the new club and people. I like to play here, to be here and if I can show this with my performance on the court so I could be satisfied. Everybody is helping me and now I have my role in how to help the team.

” Difficult language, I started to learn it, but then I got injured so I was back in Denmark for the recovery, so I need to learn more. (laughing)