#RenúnciaManoel – Brazilian players united for the future of handball

Brazilian handball has seen more peaceful days than the ones we are living now. Earlier this year, the main sponsor of the Brazilian handball, Banco do Brasil (Brazilian National Bank) decided not to renew the expiring contract and they would stop sponsoring handball and at the same time, they would invest in other sports like volleyball or street sports. With this decision, Brazilian handball loses 75% of the fundings – we don’t need to be economists to see the meaning of this loss. After the announcement of the bad news, the main names of Brazil’s handball, including the leading names of indoor and beach handball, wrote an open letter expressing their concerns about the future of the sport in their country, and these days, they have brought it one step further.

Experienced and successful players like Eduarda Amorim, Barbara Arenhart, Thiagus Petrus, Felipe Borges, Bruno Oliveira, Gil Pires or Patricia Scheppa published a video on their social media sites with the hashtag #RenúnciaManoel (Resign Manoel) addressed to Manoel Luiz de Oliveira, the president of the Brazilian Handball Federation (CBHb). The video started spreading around Brazil and even in Europe, building up a big campaign for the future of the Brazilian handball. The reason behind this is that Manoel Luiz Oliveira has been accused of misusing of money and overbilling on several occasions. His shady deals have put a shadow on Brazilian handball: the president lost his credibility and so did the handball as a whole, and this could be the main reason why the Bank of Brazil decided to invest the money in other sports. The main athletes decided to stand up against him to save the future of the Brazilian handball. 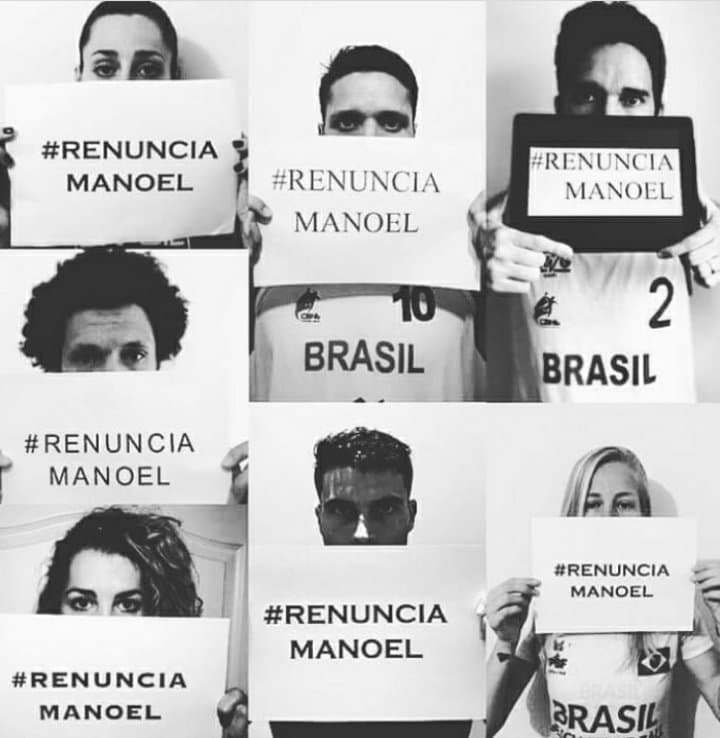 “Changes can be made by little steps, but with the power of many. We athletes are united for handball, for a management with new ways and transparency”.

Eduarda Amorim, one of the best Brazilian handball players in the history, has shared some points with TimeOut Magazine on this occasion.

TO: First, tell us some background information about your campaign. What is this whole storm about?
EA: The president of the Brazilian Handball Federation, Manoel Luiz de Oliveira has been accused of misusing money and overbilling. Since 2016, there have been more accusations on several occasions. Then in the beginning of this year, Banco do Brasil announced that they wouldn’t renew their contract that means a disaster to our handball. We had to stand up against this, so our main goal is to make the president resign. We believe as long as he is here, the other sponsors won’t come to invest in our handball.

TO: Was there any breaking point that forced you to stand up against him or was it a chain of events that led here?
EA: Obviously there were many events in the past that forced us to rise up for the future of our handball. He has been the president of the federation for 28 years. After the world championship title in Serbia, we had a competitive team, but a lot of support was missing. Instead of some positive changes after this milestone, our league just got worse and worse, these are the signs of bad management. We are not satisfied with the way they are doing the administration – the league is weak and there is no interaction between the players and the administration. The breaking point was the exit of the Bank as a sponsor because of Manuel Luiz Oliveira’s accusation – this way, the calendar can’t be guaranteed. The participation of the junior and youth national team at the world championship could be in danger – this would do a lot of harm to our handball.

TO: Is your opinion representing the opinion of the majority of the Brazilian handball players? Do you have a strong background behind you?
EA: We are united and we have the support of the main names of Brazilian handball. Here in Europe it is not easy to see, but there is a big mobilization around Brazil for this cause. There are clubs that are standing up with us. We have a big power, but we are depending on many other things.

TO: What are your expectations? Can you succeed, is he expected to leave after this? Can you put enough pressure on him?
EA: I feel we are going to put big pressure on him. Many things depend on the decision of the Federal Justice. The accusation process alone can force him to leave his position as the president of the handball federation. But independently from the decision of the Federal Justice, we want him to consider resigning because at this point, this would be the best for our handball.

TO: Do you have a candidate that could lead Brazilian handball in the favored direction?
EA: For now, we don’t have any candidate for the position. At this time, it is not possible to elect a new president according to the rules. The first step towards the right direction would be his resigning, then we could talk with the Bank to reconsider their decision about leaving. If Manoel Luiz Oliveira decides to leave, the vice president will take his position and we already have a better relationship with him. In the next two years we can look for the best possible candidate for this position.

TO: What will follow if your campaign isn’t successful? Are you going to take further steps?
EA: Of course we will try other ways then. If this campaign won’t be successful and we won’t reach our goal, we will go to bigger institutions like the Brazilian Olympic Committee (COB) or the Ministry of Sports, they are the ones that give the most public money to our federation. But we truly hope that our campaign will reach the desired goal and he will decide alone to leave because that would be the best for the Brazilian handball.