photo: Marta Kallai
GyőriAudi ETO KC is in the final after clear defeat against CSM Bucuresti

The first semifinal of the Women’s EHF Champions League is scheduled between the defending champions from Győri Audi ETO KC and CSM Bucuresti. “This will be a real show for the lovers of women handball”-Per Johansson, the head coach of the Romanian team said earlier. “The emotions and the tension is growing hour by hour”-Cristina Neagu stated a day before the big game. “We are survivors and helped by our fans we will fight until our last energies to get to the final”-Ambros Martin, head coach of  Győri Audi ETO KC said. “It will be really tough from the beginning, but we are united as a team”-Bernadett Bódi said the day before the semifinal.

Gyor has decided to have on the official start list Nora Mørk, who is in her recovery period after the knee injury suffered in February, this year. Mørk will support her teammates from the bench as a motivator. Zsuzsanna Tomori and Jana Knedlikova are still injured, not able to play. CSM Bucuresti has the whole squad on disposition.

The first half started with a hard and compact Győr defensive play where CSM Bucuresti struggled in front of the Hungarian wall, this resulted in a goalless first 11 minutes for the Romanian team, meanwhile, Győr scored for 0-3. Amorim, Oftedal, and Gorbicz signed the scorings for the defending champions, Neagu managed to put the ball in the goal for the first time 1-3 after a long inefficiency in the attack. After 1-4, CSM managed to reduce to 2-4, but Győr had still an advantage 2-5, 3-6, 4-7. After a Romanian time-out, CSM Bucuresti managed to score twice and came close to their opponent, 6-8, 7-9. CSM managed to reduce the gap to one goal, 8-9, 10-11, but Győr finished the first half with a two-goal advantage 10-12. Most efficient players for CSM Bucuresti in the first half were Neagu and Kurtovic with three goals each as for Győr Nycke Groot scored four, Anita Görbicz three goals. 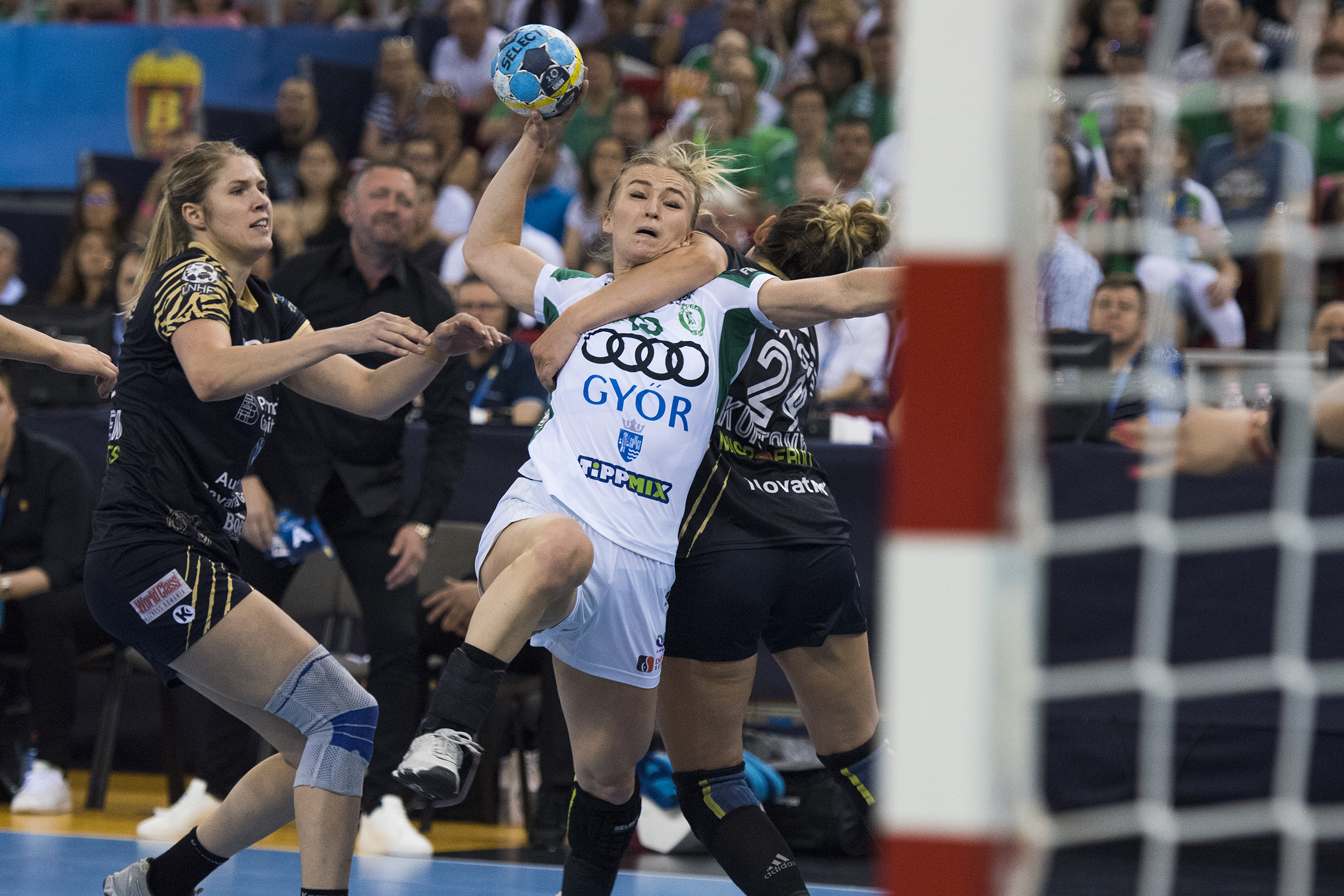 In the second half, Gyor increased the lead to 10-13, 11-14 and 12-15, but than Amorim and B\di got some smaller injuries and had to take a rest on the bench for some medical check and CSM Bucuresti used this period to reduce the gap and to level the game at 16-16 (42.minute). After a time-out called of Ambros Martin Gyor managed to reboot their game and scored twice, 16-18, so at the middle of the second half, the had again a two-goal lead. Neagu, Kurtovic, and Mehmedovic scored for the Romanians than Eva Kiss saved a 7-meter face to face with Neagu. Anita Gorbicz scored her fifth goal in the match, giving her team a new three-goal lead, 16-19.

Per Johansson called his second time-out to try to change the game of his team, but Hagman’s shoot from the rightwing is saved by Grimsbø. Jelena Grubisic presented a very good performance in the Romanian goal, giving a hard time to Gyors team. The first four-goals lead is established of Nycke Groot 16-20, but shortly after Kurtovic reduced the gap from a penalty, 17-20. In the next Hungarian attack Bodi score for 17-21 when 8 minutes was left in the semifinal. Six minutes were left when Groot made it 17-22, but Neagu reduced immediately the gap, 18-22. Two more goals added Gyor by Oftedal and Amorim (to the empty goal), 18-24. Manea netted from the line player position, 19-24 (57.minutes). Anja Althaus increased the advantage to 19-25, then the newcomer in the EHF FINAL4, Oftedal made it to 19-26. Gyor won the game 20-26 and is the first team in the final of Women’s EHF FINAL4.

Follow on Instagram
Győri Audi ETO hoping to defend the throne
Per Johansson: “We had no solutions…”