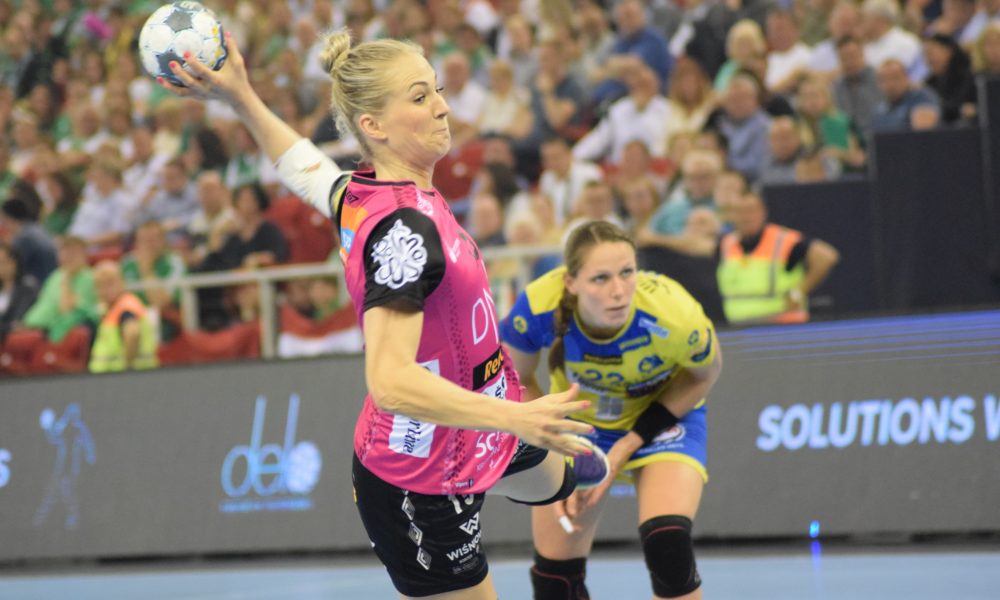 The two newcomers, Vipers, and Metz faced each other in the bronze medal game at the DELO WOMEN’S EHF FINAL4 in Budapest. Vipers were easily defeated by Gyor in the semifinal, without having a chance against the title-holders, meanwhile, Metz after a weak first half took the fight against Rostov Don and pushed them until the end, being defeated only by two goals. The bronze game is always the encounter of the losers and the question is which of the two teams could push the reset button and erase the memories of the lost semifinal.

Vipers had the better start, 1-4 against Metz, with a good performance from Katrine Lunde in the goal and Linn Jørum Sulland scoring from seven meters (becoming the top scorer of the CL). Metz seemed to be a little nervous, making mistakes both in defense and attack. Xenia Smits managed to level the game at 6-6, after 13 minutes of play. 7-6 after a penalty from Houette, the first lead for the French side in this match. 8-6 when Edwige scores from the line and she collides with Katrine Lunde inside the 6 meters and Lunde got injured, seemed to be a very serious knee injury. The veteran goalkeeper has been taken out from the court by ambulance. Vipers leveled the game quickly, 8-8. Metz was in a slight lead, 9-8 when Ole Gustav Gjekstad called his first time-out, mostly to calm down his team after the loss of Lunde. Emilie Hegh-Arntzen and Henny Ella Reistad secured some scorings for the Norwegians and Vipers took the lead back at 10-11. Metz’s head coach called his timeout, and his team managed to improve in the last part of the first half when Ngouan scored several times from the line. Halftime result: 16-15

Metz opened stronger the second half and took a three-goal advantage, 18-15. Vipers tried to keep up, Aune and Kristensen scored and Fagerheim showed some saves, but Metz had still the advantage. Smits, Zaadi and Houette pushed forward their team, 23-20 (41.minute) when Gjekstad took a time-out.

Manon Houette got injured in the 44.minute of the game, it seemed to be a muscle injury for her, she could not continue the match. Sulland scored her fifth to level the game for Vipers, 23-23 (45.minute) and she continued with more, pushing her team in lead 25-26 (51.min). The two teams could not decide, 27-27 when only seven minutes to go. Several unclear situations made the referees look being totally outside this match, when Reistad put a leading goal behind Kapitanovic, 29-30 with 90 seconds left of the match. Norwegians proved to have colder heads in the finish, Sulland scored a last 7 meter and Vipers takes the bronze medals, 30 – 31.