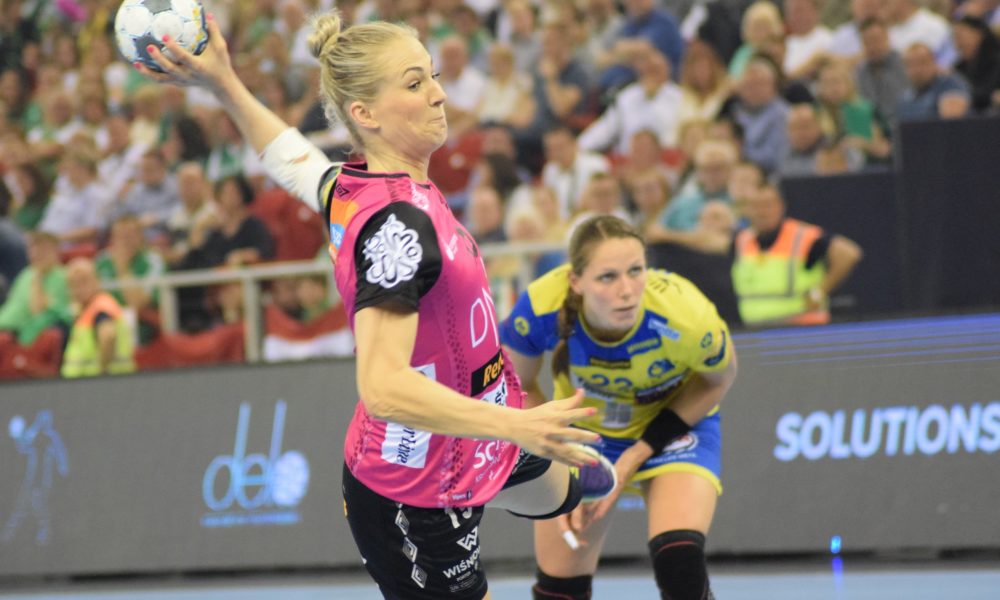 Sulland is still one of the most experienced players of Vipers and the CL / photo: Madalina Donose
DELO Women’s EHF Champions League, Group A

In group A Metz Handball, Vipers Kristiansand, HC Podravka Vegeta and FTC Rail-Cargo Hungaria will fight for the first three spots and the advancement to the Main Round.

Last seasons Final4-participants lost one of their strongest defensive bricks when Betarice Edwige moved to Győr. In addition Xenia Smits on leftback is injured and she won’t be available at the start of the season. New players has also arrived, rightback is strengthened with Louise Burgaard and Luciano is back from maternity leave on the rightwing.

the second Final4-participant which ended in group A, the Norwegian champions are aiming again to reach the final weekend in Budapest. Although they have lots of problems with injured players, the team of Ole Gustav Gjekstad seems a strong candidate to be able to repeat last seasons good performances.

Goalkeeper Katrine Lunde is still in the rehabilitation period after her ACL-injury from the Final4 bronze medal game. Vipers transferred a young talented goalkeeper who will replace Lunde, Andrea Austmo Pedersen from Byåsen (Katrine Lunde will be present as assistant coach in every game of the team). Lately Chinese national team goalkeeper Yang Yurou is also transferred and ready to help the team in the first CL-round. Young Dutch goalkeeper, Larissa Schutrups is also on the list of Vipers, but she seemes to not participate in the CL groups round.

Vipers has also signed Heidi Løke, who was meant to be one of the strongest transfers in order to give the team even more strength, but the 36 years old lineplayer got injured at the last national team session and she need to have a surgery on her knee with a 4-5 months break away the handball-court. In addition, the young prospect Henny Ella Reistad is not able to play due to a back-surgery.

HC Podravka is one of the record holders in the women’s Champions League. This will be their 26th season in the elite club competition, and they missed it only once. Out of those 25 participations, they failed to qualify for the group matches only four times. With Zlatko Saracevic on the headcoach position, since previous season Podravka started a new era.

For this season the Croatian champion managed to transfer two strong players from Krim Lubljana (Stanko, Tsakalou) and they had to say farewell to Ikneva, Chigirinova or Yezhikava.

FTC is a stable participant in the Champions League for years, always near to the top in the Hungarian League and aiming for the Final 4 in Budapest. This year they qualified to the group round with the help of a wild card, as Hungarian runner-up, making the group A to a balanced one. They have a team built on young Hungarian prospects and some experienced players like Danick Snelder or Anikó Kovacsics. Szekeres is back from maternity leave, but she will be able to play later during the season. It is also possible that Szucsánszki and Hornyák will make their comebacks after maternity leave and this will probably happen only in the second part of the season.

A high impact on FTC’s play is the fact that they lost Nerea Pena, but new profiles like Háfra and Klujber could take over her role to score goals and lead the team in crucial situations.