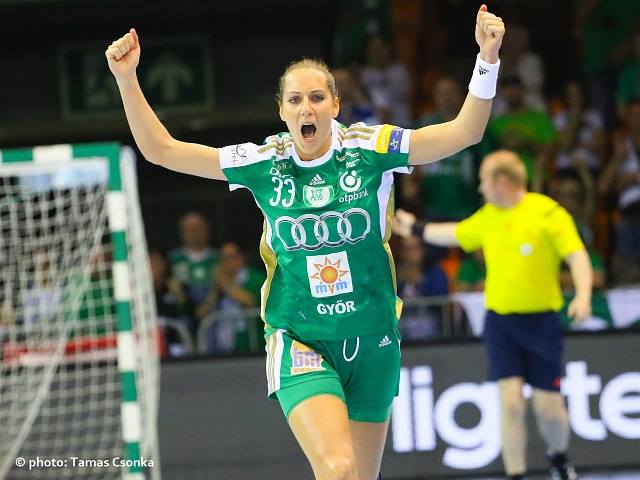 Győri Audi ETO KC has officially announced today that Hungarian rightwinger, Bernadette Bódi will finish her career as an ETO-player. The club and the player terminates the contract based on mutual agreement.

Bódi has played in Győr from 2002-2007, than she transferred to Randers, after moving home from Denmark she continued in Békéscsaba, Siófok and Dunaújváros and finally she returned to the club in 2013.

The situation now: she had another one-year agreement with the club, they needed her to help the club because of a tight schedule, and she was always open about the fact that she wants to become a mother.

“When we agreed with Bernadett Bódi earlier this year on a one-year extension of her contract, no one has seen what the coronavirus situation will bring and how the season will completely be rewritten.

“However, in the case of Jana Knedlikova, we did not exercise our option for the 2020/21 season regarding the extension, because, as I said earlier, if there is a possibility to include a Hungarian player, we will do our best to ensure that this player plays in Győr. That’s how Viktória Lukács came to us now. We were aware of it, that Bernadett Bódi had already planned his life after his career as an athlete, and her focus was primarily on starting a family.
Primarily we planned that she will help us until the end of November 2020 because of the busy schedule we would have during the summer and autumn, counting with the Olympics this summer as well, giving enough rest for Lukacs and Faluvegi. Bernadett Bódi accepted the conditions and signed the contract, but the coronavirus
changed everything. In the new situation, she decided to not start the new season based on this contract, and we terminated it by mutual agreement.

“We say goodby to an extremely useful team player, I personally will never forget when in two different editions of the FINAL4 she practically played both matches alone on her position due to injury, and her game was always a secure, reliable detail for our team. Thank you for your work so far, I wish you good luck and success in your future sports and private life.” – said, club president Csaba Bartha.

“The coronavirus situation has rewritten everything, so I’ve seen my situation differently.
I am grateful for president Csaba Bartha for his positive attitude to my request. I am leaving Győr with beautiful memories,
I am grateful for the two periods I have spent here, each
remains memorable for me on different reasons. ETO is the most important club in my career, and I continue to support the girls to win on all fronts! – sais Bódi about her decision.