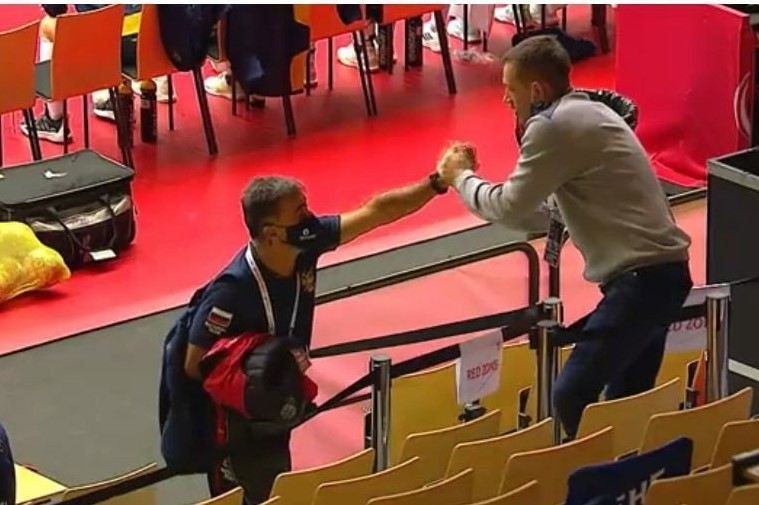 photo: tv2.dk
Ambros Martin with a warning to not respect the red-zone rules

Two days ago the Danish tv2 has registered a situation where Ambros Martin got out of the red zone inside the hall in Herning and talked with a member of the Russian delegation, than they shaked hands as well.

Both Ambros Martin and the Russian handball federations general secretary has been warned on the site immediatley ( as seen in the video by tv2.dk). After the rules of EHF stated before the EHF EURO 2020 started these types of situations when somebody is not respecting the protocols their accreditation will be withdrawn and they will be sent home.

Today has been announced and they have got away with a warning, and is has also been announnced by EHF that other delegations has also got warnings for the same reason.

“Until Sunday night approximately 3,400 Covid-19 tests have been conducted at Women’s EHF EURO 2020. As communicated earlier, one Romanian and two Serbian players have tested positive for Covid-19 – before entering the red zone respectively before playing the first match – and have subsequently been quarantined.

“Furthermore, the European Handball Federation has issued five warnings, namely one each for the delegations of the Czech Republic, Serbia, Croatia, Spain, and Russia, for not respecting parts of the hygiene protocol.

“In addition to this, organizational measures will be implemented at Jyske Bank Boxen in Herning in order to secure the separation between the different zones.
The European Handball Federations underlines that in all cases the warning issued is the sole and final one. Any additional infringement of the hygiene protocol will result in the immediate withdrawal of the respective accreditations and exclusion from the tournament.