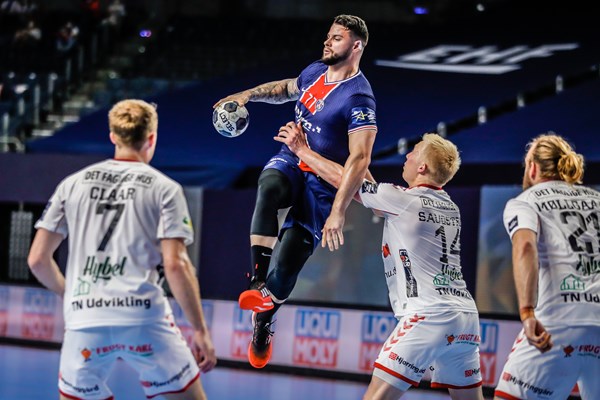 In the first semiifnal of the EHF FINLA4 Men 2021 PSG participate for the fifth time and will meet the newcomers to the evenet, Danish champions from Aalborg.

Raul Gonzalez, PSG Handball head coach: “They have only strong points. Aalborg plays very good defense, very aggressive, with a very good goalkeeper. After you have this, you have very good fast breaks, and they are using this. After this, in attack, they are not using a lot of players but the players in the attack have very good quality. The middle back is playing really fantastic, with the pivot and the backs. The rest of the players have really good qualities for shooting, for passing the ball, and their handball is really fantastic.”

“If you had spoken to us before the season none of us thought that we actually could do it. Through the season we have said that we wanted to go here and we had the quality, and in the team we knew that if we could do it on the right days we had the quality to be here. But of course it’s a big step for us as a team, but especially as a club, that we managed to go this far already this year.”

In the first ten minutes both teams had shown a hogh-quality defensive play, PSG scored mostly from 7 meters, Mikkel Hansen took the responsibility for those, meanwhile Danes struggled to put the ball behind Genty in the French goal. Pandi and Stens made the offensive play for the French side, meanwhile Aalborg had some good attacks by Mølgaard, Claar or with the lineplayers. PSG had the advantage throughout the entire first half, but Aalborg fought back and finished the first thirty minutes only two goals behind, 15-13.

In the second half, PSG had the better start, increasing quickly the lead to 19-15 and it looked like that they have control of the game in the match, but Aalborg managed to reduce the gap after 45 minutes to 23-22 with a good period. After 18 minutes played in the second half Aalborg levels the game 24-24 helped by Simone Gade in the Danish goal. The first Danish lead is 24-25, ten minutes before the end of the semifinal. From here starts a two-sided chase of the victory, Aalborg having continuously the slight one-goal advantage, or it was a draw. With five minutes to go, Aalborg had the lead again 29-30 and PSG began to look very frustrated. 29-31 was the lead of the Danish side, when headcoach Madsen got a yellow card, PSG scored quickly, but Aalborg scored once again 30-32. Felix Claar, or Saugstrup scored on their chances, and Luka Karabatic netted also twice in the money-time. This was not enough for PSG to qualify to the final as Aalborg managed to keep their lead and Lukas Sandel scored in the last ten seconds for a two-goaøs advantage, winning the semifinal as a newcomer against a much more expensive squad.

Gjekstad – biggest achievement as head coach in club handball
EHF FINAL4 MEN 2021: Barca defeats Nantes and is in the final